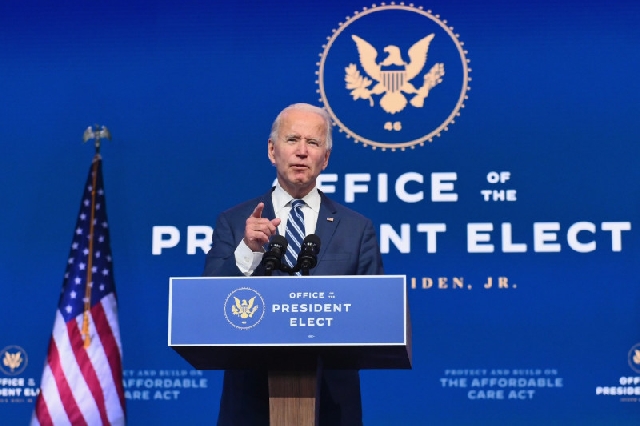 Joe Biden has warned "people may die" if his incoming presidential administration continues to be impeded by Donald Trump.

Speaking in Delaware, the president-elect said co-ordination was needed to tackle the coronavirus outbreak.

He called President Trump's refusal to acknowledge he lost the vote, despite calls to do so from both sides, "totally irresponsible".

"This is not a game," former first lady Michelle Obama wrote on social media.

President-elect Biden has 306 votes in the electoral college, surpassing the 270 threshold needed to win.

Yet Mr Trump, a Republican, tweeted on Monday morning: "I won the Election!"

The Trump campaign launched a flurry of legal challenges in the wake of the 3 November vote to contest ballot counts.

The General Services Administration (GSA), the government agency tasked with beginning the transition process for a new president, has yet to recognise Mr Biden and his running mate Kamala Harris as winners, leaving them without access to sensitive government briefings that are normally provided to an incoming administration.

Aides to the Democratic president-elect have said that Mr Trump's refusal to engage in a transition also means Mr Biden's team has been excluded from planning around a vaccination distribution strategy.

In his speech on Monday, Mr Biden said of the stalled transition: "Does anyone understand this? It's about saving lives, for real, this is not hyperbole."

"More people may die if we don't co-ordinate," he added.

Calling nationwide vaccine distribution a "huge, huge undertaking", Mr Biden said that if his team had to wait until 20 January - his presidential inauguration - until they could begin work on the distribution programme, they would be behind by "over a month, month and a half".

Asked if he would encourage state leaders to reinstate stay-at-home orders, the president-elect sidestepped, and instead called on officials to encourage mask-wearing.

How are Trump's legal challenges going?

No reasons were given for halting the legal action. Each case had been brought by voters - not by the Trump campaign or by Republican officials.

The Wisconsin Elections Commission on Monday said the Trump campaign would have to pay nearly $8m (£6m) for a vote recount in that state - which Mr Biden appears to have won by 20,000 ballots - if it still wanted one.

But in a consolation for Mr Trump, Georgia officials said they had found nearly 2,600 ballots that were not counted in a Republican-leaning county on election night. A voting official in the state, Gabriel Sterling, said the ballots were overlooked because of "a person not executing their job properly".

The isolated discovery was expected to improve Mr Trump's vote count by a net 800, though not by enough to overturn Mr Biden's lead of more than 14,000 ballots.

Georgia is conducting a statewide, by-hand recount because of the 0.3% margin separating the rivals.

Meanwhile, the official overseeing the recount, Georgia Secretary of State Brad Raffensperger, told CNN on Monday that he had been coming under pressure from a fellow Republican, Trump ally and South Carolina Senator Lindsey Graham, to disqualify legally posted ballots in certain counties.

Mr Graham denied the claim, telling Politico the two had merely had a "very pleasant" conversations about signature verification processes.

What did Michelle Obama say?

She described the difficulty of welcoming Mr Trump to the White House four years ago after he "spread racist lies about my husband that had put my family in danger" - referring to bogus claims the current president amplified about Mr Obama's birthplace.

However, "our love of country requires us to respect the results of an election even when we don't like them or wish it had gone differently - the presidency doesn't belong to any one individual or any one party", Mrs Obama wrote.

"To pretend that it does, to play along with these groundless conspiracy theories - whether for personal or political gain - is to put our country's health and security in danger. This isn't a game," she said.

Mrs Obama called on Americans, "especially our nation's leaders, regardless of party", to "honour the electoral process and do your part to encourage a smooth transition of power".

"The American people had spoken. And one of the great responsibilities of the presidency is to listen when they do," she wrote.