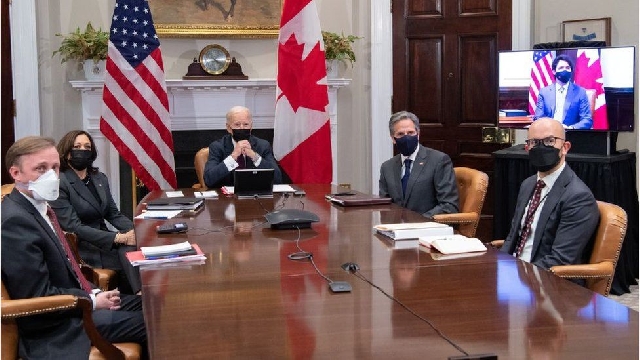 US President Joe Biden has spoken with Canadian Prime Minister Justin Trudeau in his first bilateral meeting with a foreign leader since taking office.

The two leaders highlighted mutual policy priorities around climate change and China, including the release of two Canadians held captive there.

Canada is often the destination chosen for a US president's first foreign trip, but Covid-19 scuppered Mr Biden's plans. Instead, the meeting was held remotely.

Mr Biden, a Democrat, is hoping to hit the reset button with Mr Trudeau, a Liberal, whose relationship with the former Republican US President Trump was often considered rocky.

Mr Trudeau also pledged to work with the US to "get through Covid but also to make sure we're pulling our weight around the world".

The leaders did not take questions from journalists, which is unusual in Washington for a bilateral event such as this.

What was said on China?

One major issue for both leaders is the Chinese detention of two Canadians, who have been accused of spying and held in jail since 2018.

Canada alleges that the men were arrested as retribution for the arrest of Huawei executive Meng Wanzhou on a US warrant.

Michael Spavor and Michael Kovrig were arrested in China in 2018 and formally indicted in June 2020.

Calling for their release in remarks following the meeting, Mr Biden said: "Human beings are not bartering chips. We're going to work together until we get their safe return."

What was said on climate change?

Mr Trudeau in his opening remarks criticised the Trump administration, and thanked Mr Biden for "stepping up".

The prime minister added: "As we are preparing the joint rollout and communique... it's nice when the Americans aren't pulling out all references to climate change."

Mr Biden later said that Canada and the US would "work in lockstep to display the seriousness of our commitment [to climate change] both at home and abroad".

But the two leaders did not publicly comment on the White House's decision to cancel the Keystone XL pipeline project, which would have transported oil from Canada's Alberta province to US refineries.

In a phone call two days after Mr Biden took office - Mr Biden's first official call as president - Mr Trudeau conveyed his "disappointment" at the pipeline decision. A US official later said the closure would "not be reconsidered".

Earlier on Tuesday, Press Secretary Jen Psaki told reporters Mr Biden had made clear to Mr Trudeau that the project was "not in the interests of the United States and that we want to try to address our climate crisis, while also creating good paying union jobs".

The US and Canada share one of the world's largest trade partnerships, and exchange close to $2bn (C$2.5bn/£1.4bn) in goods and services daily.