Biden predicts victory over Trump as counts head his favour 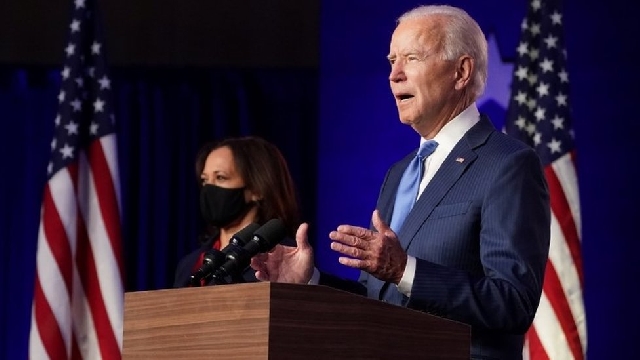 Joe Biden has again said he is confident of victory as he inches closer to beating Donald Trump after Tuesday's US presidential election.

The Democratic challenger now has 253 of the 270 Electoral College votes needed to clinch the White House under the state-by-state US voting system.

What did Biden say?

He said he was on track to win more than 300 Electoral College votes and pointed out that more people had voted for his campaign - over 74 million people - than any US presidential candidate in history.

Mr Biden said Americans had given him a mandate to tackle the coronavirus pandemic, the struggling economy, climate change and systemic racism.

The Democrat - presenting himself as the candidate of unity after a bitterly fought campaign - said it was time to "get the vitriol out of our politics" and "be civil to one another".

"We may be opponents but we're not enemies, we're Americans," said Mr Biden, who did not mention his Republican opponent, Mr Trump.

Mr Biden's appearance had originally been planned as a victory speech, but he opted instead to give a general update on the state of the race as US TV networks cautiously held off declaring him the winner.

The Democrat said he hoped to address Americans again on Saturday.