Blackman dies after US officer kneels on neck 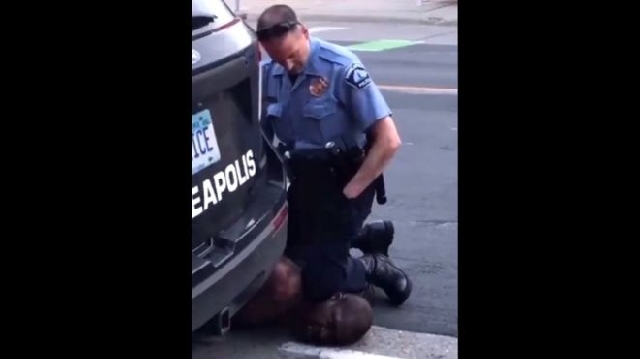 Video of the incident in Minneapolis was posted on social media

The FBI will investigate the death of a black man in the US state of Minnesota after a video emerged showing a policeman kneeling on his neck.

In the footage, the man, believed to be in his 40s, is heard groaning and repeatedly saying "I can't breathe" to the white officer.

The Minneapolis Police Department said it was responding to a reported crime.

The incident echoed that of Eric Garner, a black man who died being arrested in 2014.

Garner was placed in a chokehold and uttering the words "I can't breathe" nearly a dozen times.

The phrase became a rallying cry for activists protesting alleged police brutality against people of colour in the US.

The Minnesota Police admitted that the man in the footage filmed on Monday died after a "medical incident" in a "police interaction".

He was suspected of committing a forgery, meaning to have been fraudulently altering or making a false reproduction of a product.

At a press conference on Tuesday, Minneapolis Mayor Jacob Frey described the incident as "completely and utterly messed up".

"I believe what I saw and what I saw is wrong on every level," Mr Frey said. "Being black in America should not be a death sentence."

It is the latest accusation of US police brutality against African Americans. Recent high-profile cases include an officer in Maryland who fatally shot a man inside a patrol car.

The incident in Minneapolis on Monday evening began after officers located the man in his car, police said in a statement. They were told the man, who has not been identified, was "sitting on top of a blue car and appeared to be under the influence".

After being ordered to step away from the vehicle, the man physically resisted officers, according to police. "Officers were able to get the suspect into handcuffs and noted he appeared to be suffering medical distress," the statement added.

In the 10-minute video filmed by a witness, the man is kept on the ground by the officer and, at one point, says: "Don't kill me".

Witnesses urged the officer to take his knee off the man's neck, noting that he was not moving. One says, "His nose is bleeding", while another pleads, "Get off his neck."

The man then appears motionless before he is put on a stretcher and into an ambulance.

Police said no weapons were used during the incident and that body camera footage had been handed to the Minnesota Bureau of Criminal Apprehension, which is investigating the case. Two of the officers involved have been put on paid administrative leave.

After the video emerged, police said in a statement: "As additional information has been made available, it has been determined that the Federal Bureau of Investigations will be a part of this investigation."

Speaking to US media on Tuesday, Minneapolis Police Chief Medaria Arradondo said the force's policies "regarding placing someone under control" will be reviewed as part of the probe.

The FBI did not respond to a request for comment.

"I can't breathe" became a national rallying cry against police brutality in the US after the July 2014 death of Eric Garner.

Garner, an unarmed black man, uttered the phrase 11 times after being detained by police on suspicion of illegally selling loose cigarettes. They were the final words of the 43-year-old, who died after a police officer placed him in a chokehold.