British IS fighters taken into US custody, says Trump 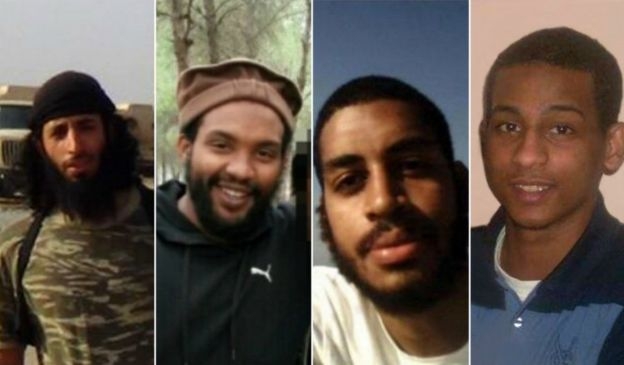 Two of the so-called "IS Beatles" have been taken out of Syria to "a secure location controlled by the US", President Donald Trump has said.

El Shafee Elsheikh and Alexanda Kotey are accused of being part of an Islamic State group cell which kidnapped and murdered Western hostages in Syria.

The pair - who are from London - are in the custody of the American military, according to US media reports.

In a tweet, Mr Trump described them as "the worst of the worst".

He said the decision to remove them from Syria had been taken "in case the Kurds or Turkey lose control".

The New York Times and Washington Post say the pair have been removed from a prison run by Kurdish militia in northern Syria.

The announcement comes after the US withdrew its forces from the region this week.

On Wednesday President Trump told reporters the US had transferred "some of the most dangerous IS fighters" amid fears they could escape custody as Turkish troops invade Kurdish-held territory in northern Syria.

The Kurds - who helped defeat IS in Syria and were key US allies in that fight - guard thousands of IS fighters and their relatives in prisons and camps in areas under their control. It is unclear whether they will continue to do so if fighting breaks out.

Other members of the IS cell - dubbed "The Beatles" because of their British accents - included Mohammed Emwazi, known as Jihadi John, who was killed in a US air strike in 2015, and Aine Davis, who has been jailed in Turkey.

Emwazi is thought to have killed US journalist James Foley in 2014.

All four were radicalised in the UK before travelling to Syria. Elsheikh and Kotey have since been stripped of their British citizenship.

The pair are designated as terrorists by the US State Department, which links them to the group's executions and "exceptionally cruel torture methods" including electric shocks, waterboarding and mock executions.

They were said to have been captured by Kurdish forces in January 2018.

The New York Times reports the US is planning to take Elsheikh and Kotey to Virginia - one of the few states that still carries out the death penalty - where they will be put on trial.

A Home Office spokesperson said "it would be inappropriate to comment whilst legal proceedings are ongoing".

It remains to be seen whether the evidence against the pair amassed by British investigators will be handed over in full to US authorities.

Former Prime Minister Theresa May, when she was home secretary in 2015, told Washington the UK would only hand over evidence after receiving a categorical guarantee that neither man would be executed.

The UK has long sought and obtained such a death penalty assurance from the US.

That position was reiterated by Mrs May's successor, Amber Rudd, but then reversed after Sajid Javid entered the Home Office in April 2018.

Mr Javid decided to hand over 600 witness statements, without seeking any kind of guarantee that Elsheikh and Kotey would not be put to death.

Elsheikh's mother, Maha Elgizouli challenged the decision but, in January, lost that case in the High Court.

The issue is currently being decided by the UK Supreme Court.