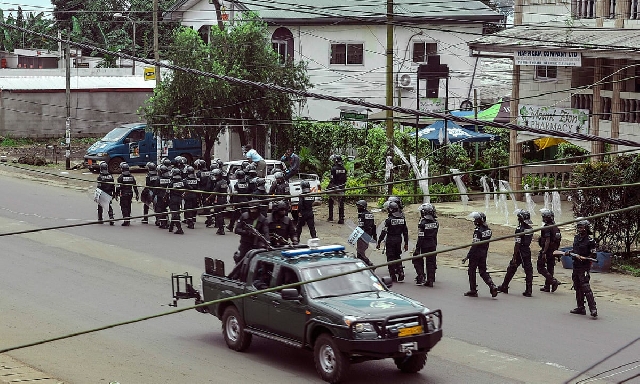 Cameroon Soldiers on the ground

A top official of Cameroon's opposition CRM party has said that a number of anti-government demonstrators have been targeted by security forces in the biggest city, Douala.

"Peaceful protesters have been shot at, arrested, brutalised and tear-gassed," said Barrister Christopher Ndong, the first vice-president of the party.

A journalist working for private-owned newspaper La Nouvelle Expression was among those arrested in the capital, Yaoundé. Unverified reports suggest that dozens of CRM activists were arrested there on Tuesday morning.

The police have not responded to the BBC's request for comment.

Anti-government demonstrators have taken to the streets in several towns and cities, including Douala, Yaounde, Bafang, and Baham - the hometown of CRM leader Maurice Kamto, in the west of the country.

They have been calling for an end to the Anglophone crisis and a reform of the electoral code.

Mr Kamto has suggested if the two issues are not addressed, the protests will continue until President Paul Biya is forced from power.

Mr Biya has been in power since 1982. He was re-elected in 2018 in an election that Mr Kamto claimed he won.

Government spokesman Rene Emmanuel Sadi has criticised the opposition leader, saying that the protests were the weapon of a politician who cannot win an election.