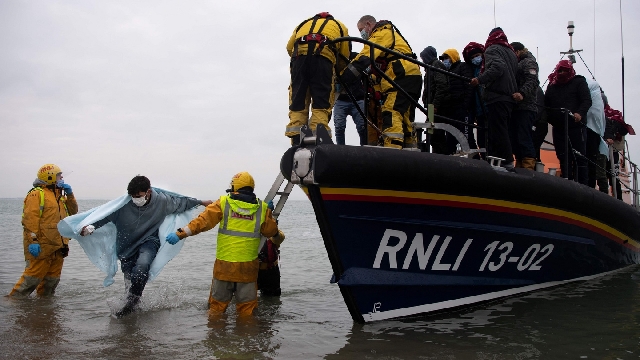 Migrants crossing the sea have been drowning for years

The UK and France will keep "all options on the table" to stop migrants crossing the English Channel after 27 people drowned on Wednesday.

Four people have been arrested in connection with the fatal crossing.

Five women and a girl were among the dead, France's interior minister said.

Gerald Darmanin also said two people had been rescued and one was missing.

It was earlier reported 31 people had died, but the total was revised down overnight into Thursday.

Boris Johnson said he was "appalled" by the tragedy, adding the UK would leave "no stone unturned" to stop human trafficking gangs.

The alarm was raised on Wednesday after a fishing boat crew spotted several people at sea off the coast of France.

The International Organization for Migration said it was the biggest single loss of life in the Channel since it began collecting data in 2014.

The prime minister said on Wednesday that while the UK and France had agreed more needed to be done, there had been "difficulties" persuading the French "to do things in a way that we think the situation deserves".

Speaking after an emergency government Cobra meeting on Wednesday, Mr Johnson said it was clear French attempts to stop the migrant boats leaving "haven't been enough".

He said he hoped the French would find a renewed offer of joint patrols along the French Channel coast "acceptable".

Meanwhile, French officials said Mr Macron had told Mr Johnson "he was expecting the British to cooperate fully, and that they abstain from instrumentalizing a tragic situation for political purposes".

The UK has pledged to pay France €62.7m (£54m) during 2021-22 to help increase police patrols along its coastline, boost aerial surveillance and increase security infrastructure at ports.