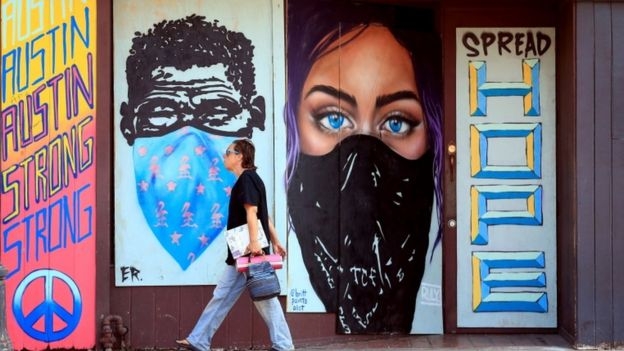 Texas hit a record of more than 8,000 virus cases in a day on Wednesday

Texas Governor Greg Abbott has ordered face coverings to be worn in public as coronavirus cases rocket in the state.

The directive applies to counties with 20 or more Covid-19 cases, which covers most of Texas' 254 counties.

Americans are about to mark the Fourth of July weekend, with some beaches coast to coast shut and fireworks displays cancelled.

There have now been 2.7 million recorded infections nationwide and more than 128,000 deaths since the pandemic began.

What did the Texas governor say?

"Wearing a face covering will help us to keep Texas open for business," Mr Abbott said, announcing the order.

After an initial warning, those who refuse will face a fine up to $250.

"Let me be clear: no-one can ever be put in jail for violating this safe practice," the governor said.

"Covid-19 is not going away," Mr Abbott, a Republican, said on Thursday. "In fact it's getting worse."

Warning that some hospital intensive care units were almost full, he added: "We are now at a point where the virus is spreading so fast there is little margin for error."

The order includes a series of "common sense" exemptions, including children who are 10 years old or younger, those who have a medical condition that prevents them from wearing a mask, people who are eating or drinking and those who are exercising outdoors.

Texas is now one of 21 states that require mask wearing in public, according to Masks4All, a volunteer advocacy group.

But the move by Mr Abbott was described as "far too little, far too late" by the Texas Democratic Party.

How did we get here?

Texas led the charge in US states loosening lockdown measures that were meant to curb the spread of the coronavirus.

Mr Abbott allowed his initial stay-at-home order to expire on 30 April, with almost all businesses operating to at least 50% capacity by early June.

But as the virus surged, Mr Abbott began to walk back his state's reopening last week, ordering all bars shut and cutting restaurant capacity from 75-50%.

Mr Abbott had initially resisted a state-wide order on masks, going so far as to ban local governments from requiring facial coverings.

When we reopened, my friends all went to the Houston bars, and they have all tested positive now.

I'm a Republican, but I don't think Trump should be enforcing rules if he isn't following them.

The reopening should have been done less quickly.

I think initially the decision by local and state government, who closed down everything quickly, was made out of fear instead of data.

Infection rates are rising in 40 of the 50 states, reports the Associated Press, and not all the increases can be explained by expanded testing.

Recent reopenings fuelled job creation at a record pace of 4.8 million in June, according to the US Department of Labour, but employment remains 14.7 million jobs below pre-pandemic levels.

For the first time, Florida reported over 10,000 new daily cases - more than any European country at the height of their outbreaks, according to Reuters news agency Alabama Governor Kay Ivey extended that state's public health emergency for another 90 days - making it set to expire on 9 September. Chicago city officials announced that travellers to the Illinois city from 15 of the worst-hit states will have to quarantine for two weeks upon arrival or face possible fines