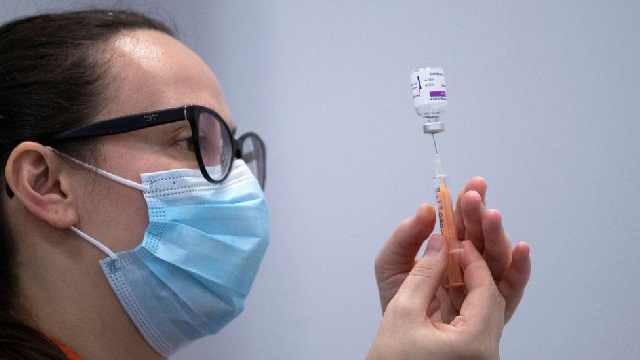 Results that show the Oxford-AstraZenenca vaccine may reduce the spread of coronavirus have been hailed as "absolutely superb" by the health secretary.

Matt Hancock said the study shows "vaccines are the way out of this pandemic".

It is the first time a vaccine has been shown to reduce transmission of the virus.

The UK has given a first Covid jab to 9.6 million people so far.

The results of the study, which has not yet been formally published, suggest that the vaccine may have a "substantial" effect on transmission of the virus.

It means the jab could have a greater impact on the pandemic, as each person who is vaccinated will indirectly protect other people too.

Mr Hancock called the study "really encouraging" on Twitter, adding that the results were "absolutely superb".

Speaking on BBC Breakfast, he said this latest analysis showing the vaccine reduces transmission would "help us all get out of this pandemic".

The study by the University of Oxford, where the vaccine was developed, measured the impact on transmission by testing for asymptomatic infections, swabbing participants every week in addition to recording when anyone fell ill with Covid-19.

As well as showing an effect on transmission, the study found the vaccine offered 76% effective protection from a single dose for three months.

With no fall in protection during the three-month period, the researchers said the results supported gaps between first and second doses of between four and 12 weeks. The effectiveness of the vaccine increased with a longer gap of 12 weeks before the booster jab.

When the second dose is given, the study found the level of protection from the Oxford-AstraZeneca vaccine rises to 82%.

The UK has set itself apart from many other countries by prioritising giving the first dose to as many people as possible, delaying the second jab for about 12 weeks.

The aim is to save more lives by giving some protection to a larger number of people, but the UK has faced criticism from the British Medical Association for following this path with no international support.

It "reassures us that people are protected from 22 days after a single dose of the vaccine," he says.

Use of the Oxford vaccine has been restricted by French health authorities who say it should only be given to people under 65.

Mr Hancock, the UK health secretary, said scientists had looked directly at the over-65s and there was "a high degree of confidence" that the Oxford vaccine worked on people of all ages.

He added that the latest research showed the world the vaccine works - "it works well" and "categorically supports" the government's strategy.

Asked if it could now mean children in England returning to school before 8 March, he pointed out 30,000 people were still in hospital.

Alongside the Oxford vaccine, the Pfizer/BioNTech vaccine is also being rolled out across the UK.

Clinical trials of the Pfizer vaccine and Moderna, which has been approved but is not yet in use, did not look for a potential impact on transmission.

However, BBC health correspondent James Gallagher said the different vaccines all target the same part of the virus so if one can cut transmission, there is a good chance the others can too.