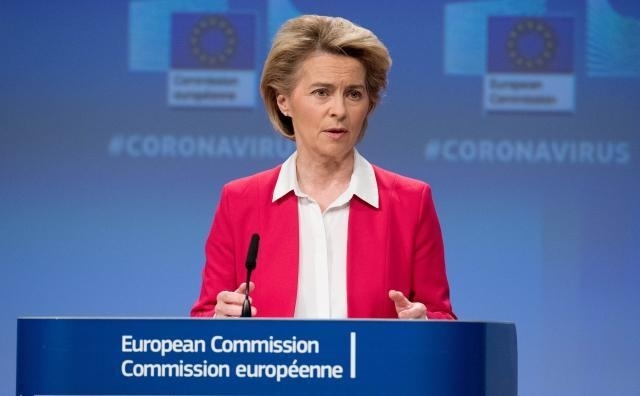 European Commission President Ursula von der Leyen has admitted the EU was late to authorise Covid-19 vaccines and "we're still not where we want to be".

She acknowledged shortcomings in the Commission's vaccine response in a speech to the European Parliament.

Mrs von der Leyen faced criticism from MEPs over the EU's handling of the rollout.

However, she was adamant that the decision to order vaccines collectively was "the right thing to do".

The Commission has come under fire for the slow pace of delivery under its vaccine scheme, which was established in June last year and allows it to negotiate the purchase of vaccines on behalf of its member states.

The rollout has also been hit by delays from vaccine producers including Oxford-AstraZeneca and Pfizer-BioNTech, amid issues of capacity and supply.

Mrs von der Leyen has spoken to a number of newspapers in recent days but this was her first public acceptance of criticism. Last week, she told German website Süddeutsche Zeitung that "a country on its own can be a speedboat, the EU is more like a tanker".

What did the Commission president say?

"We were late to authorise. We were too optimistic when it came to massive production," the Commission president acknowledged, "and perhaps too confident that what we ordered would actually be delivered on time." She also noted that questions would have to be answered about what went wrong.

However, the head of the Commission maintained that a joint EU response had been the correct decision in dealing with the pandemic: "I can't even imagine if a few big players had rushed to it and the others went empty-handed.

She also defended the time taken to approve vaccines, which she described as "an essential investment to establish confidence and security".

The Commission president said she "deeply" regretted a threat made by the EU last month to restrict the flow of vaccines passing between Ireland and Northern Ireland.

"But in the end we got it right and I can reassure you that my Commission will do its utmost to protect the peace in Northern Ireland."

How did MEPs respond?

Right-wing Danish MEP Peter Kofod complained that the EU was "treading water" while other countries such as the UK, US and Israel made big strides in vaccinating their populations.

But there was support for the EU's response, too.

Spanish centre-right Euro MP Esteban González Pons said if it had not been for the Commission's decision to centralise the purchase of vaccines, his country and others would have not have received their consignments "because of a lack of political clout and budget".

"Not everything was perfect in the last weeks and the last months," said Manfred Weber, the chairman of the centre-right EPP group of MEPs. "The key decisions were right."