Covid: Omicron and Delta driving tsunami of cases – WHO 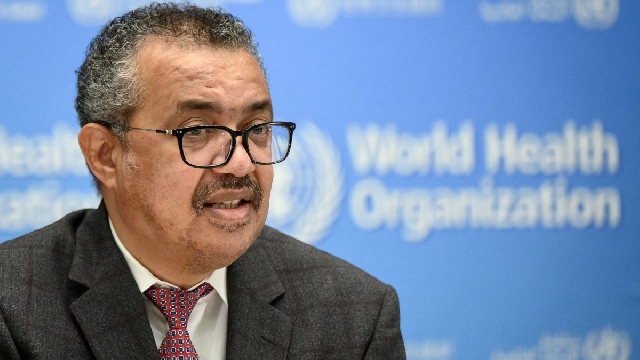 The combination of Delta and Omicron variants is driving a dangerous tsunami of Covid-19 cases, the World Health Organization (WHO) chief has said.

Tedros Adhanom Ghebreyesus' words came as the US and countries across Europe reported record new cases.

France reported Europe's highest ever daily figure for the second day in a row, at 208,000 cases.

And the US has reported a record average of 265,427 cases a day over the last week, according to Johns Hopkins.

Denmark, Portugal, the UK and Australia have all also reported record-breaking figures.

Poland reported 794 Covid-related deaths on Wednesday, the highest number in its fourth wave of the pandemic. More than three-quarters of these were unvaccinated people.

Studies suggest that Omicron - which has quickly become dominant in numerous countries - is milder than the Delta variant, but far more contagious. It is believed to be driving the surge in cases, with French health minister Olivier Véran telling reporters he would "no longer speak of a wave when it comes to Omicron" but a "tidal wave".

However, Dr Tedros warned it was the "twin threat" of the two variants that was behind the overall caseload.

"This is and will continue to put immense pressure on exhausted health workers, and health systems on the brink of collapse," the WHO chief added.

At the moment, some 900,000 new cases are being reported around the world every day, Reuters news agency reports.

Dr Anthony Fauci, America's top infectious disease expert, has told CNN Omicron infections are likely to peak at the end of January in the US, given its population size and vaccination rate.

Several wealthy nations have launched booster drives to give third doses of Covid vaccines, including the UK where 57% of people over 12 have now received three jabs.

However, Dr Tedros told reporters richer countries' large-scale booster campaigns were "likely to prolong the pandemic", as they diverted supplies away from poorer, less vaccinated countries, thereby "giving the virus more opportunity to spread and mutate".

He went on to ask "everyone to make a New Year's resolution to get behind the campaign to vaccinate 70%" of the world by mid-2022. Almost 100 countries are yet to meet the original target of vaccinating 40% of their populations, the WHO says.

According to a WHO report published on Tuesday, the number of new Covid infections of all variants grew by 57% in Europe in the week before 26 December, and by 30% in the Americas.

Those numbers still seem to be climbing, with yet more records set on Wednesday:

Officials have warned that some of the high figures may be partly due to delays in reporting because of Christmas.

One effect of the record infections has been staff shortages in some essential services, due to people isolating so as not to spread the virus.

In Britain, the Fire Brigades Union says about a third of fire engines in London were unavailable for use earlier this week because of staff testing positive for coronavirus or having to isolate.

And in the US state of Texas, members of the National Guard are being used in support roles at several juvenile detention centres.

On Wednesday, Spain - which has seen a record 1,360 cases per 100,000 over the past fortnight - cut its isolation period from 10 days to seven, to alleviate staffing strains. The US has already reduced the period, while the UK has said those who test negative for two days will be allowed to leave isolation after a week.