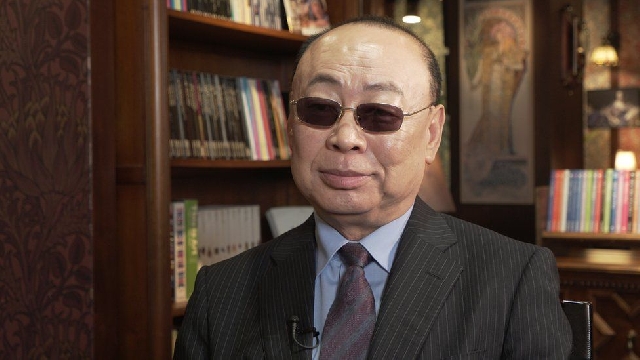 It has taken weeks of discussions to get an interview with him, and he's still worried about who might be listening. He wears dark glasses for the camera, and only two of our team know what we think is his real name.

Mr Kim spent 30 years working his way to the top ranks of North Korea's powerful spy agencies. The agencies were the "eyes, ears, and brains of the Supreme Leader", he says.

He claims he kept their secrets, sent assassins to kill their critics, and even built an illegal drugs-lab to help raise "revolutionary" funds.

Now, the former senior colonel has decided to tell his story to the BBC. It's the first time such a senior military officer from Pyongyang has given an interview to a major broadcaster.

Mr Kim was the "reddest of the red", he says in an exclusive interview. A loyal communist servant.

But rank and loyalty do not guarantee your safety in North Korea.

He had to flee for his life in 2014, and since then he has been living in Seoul and working for South Korean intelligence.

He depicts a North Korean leadership desperate to make cash by any means possible, from drug deals to weapons sales in the Middle East and Africa. He told us about the strategy behind decisions being made in Pyongyang, the regime's attacks on South Korea, and claims that the secretive country's spy and cyber networks can reach around the world.

The BBC cannot independently verify his claims, but we have managed to verify his identity and, where possible, found corroborating evidence for his allegations.

We contacted the North Korean embassy in London and the mission in New York for a statement, but have so far received no response.

Mr Kim's last few years in North Korea's top intelligence unit offer some insight into the early career of the current leader, Kim Jong-un. He paints a picture of a young man eager to prove himself as a "warrior".

North Korea formed a new spy agency called the Reconnaissance General Bureau in 2009, just as Kim Jong-un was being groomed to succeed his father, who had suffered a stroke. Chief of the bureau was Kim Yong-chol, who remains one of the North Korean leader's most trusted aides.

The colonel said that in May 2009, an order came down the chain of command to form a "terror task force" to kill a former North Korean official who had defected to the South.

"For Kim Jong-un, it was an act to satisfy the supreme leader (his father)," Mr Kim says.

"A 'Terror Force' was formed to assassinate Hwang Jang-yop in secret. I personally directed and carried out the work."

Hwang Jang-yop was once one of the country's most powerful officials. He had been a key architect of North Korean policy. His defection to the South in 1997 had never been forgiven. Once in Seoul, he was extremely critical of the regime, and the Kim family wanted revenge.

But the assassination attempt went wrong. Two North Korean army majors are still serving 10-year prison sentences in Seoul for the plot. Pyongyang always denied it was involved and claimed South Korea had staged the attempt.

"In North Korea, terrorism is a political tool that protects the highest dignity of Kim Jong-il and Kim Jong-un", he says. "It was a gift to demonstrate the successor's loyalty to his great leader."

There was more to come. A year later, in 2010, a South Korean navy ship, the Cheonan, sank after being hit by a torpedo. Forty-six lives were lost. Pyongyang has always denied its involvement.

Then, in November that year, dozens of North Korean artillery shells hit the South Korean island of Yeongpyeong. Two soldiers and two civilians were killed.

There has been much debate over who gave the order for that attack. Mr Kim said he was "not directly involved in the operations on the Cheonan or Yeonpyeong Island", but they "were not a secret to RGB officers, it was treated with pride, something to boast about".

And those operations would not have happened without orders from the top, he says.

"In North Korea, even when a road is built, it cannot be done without the direct approval of the Supreme Leader. The sinking of the Cheonan and the shelling of Yeongpyeong Island are not a thing that could be carried out by subordinates.

"This kind of military work is designed and implemented by Kim Jong-un's special orders. It's an achievement."

'Spy in the Blue House'

Mr Kim says one of his responsibilities in the North was developing strategies to deal with South Korea. The aim was "political subordination".

That involved having eyes and ears on the ground.

"There are many cases where I directed spies to go to South Korea and performed operative missions through them. Many cases", he claims.

He doesn't elaborate, but he does give us one intriguing example.

"I can tell you that North Korean operatives are playing an active role in various civil society organisations as well as important institutions in South Korea."

The BBC has no way of verifying this claim.