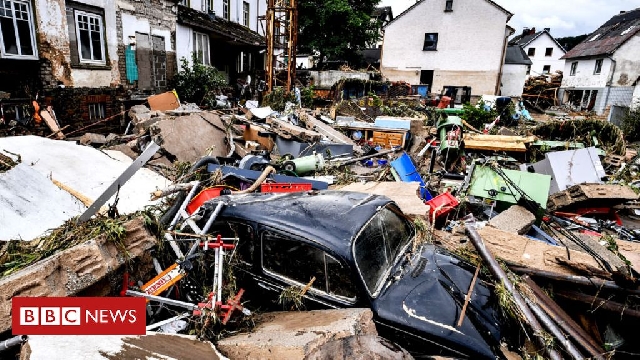 The floods killed 155 in Germany and 27 in Belgium

The death toll across Germany and Belgium topped 180 on Sunday after rescue workers dug deeper into debris left by receding waters.

Some 155 people have been confirmed dead in Germany while 27 have died in Belgium.

Germany’s finance minister Olaf Scholz has said that officials must begin setting up a rebuilding programme which is likely to cost billions.

He said he would propose a package of immediate aid, totalling at least 300 million euros (£257 million), at a Cabinet meeting on Wednesday.

Meanwhile, Chancellor Angela Merkel is set to visit the devastated Schuld, a village near Ahrweiler in the worst-hit Rhineland-Palatinate region, on Sunday. Some 110 people are known to have died in the region.

Some 65 people were evacuated from their homes in Germany‘s Berchtesgaden area after the Ache River swelled. At least one person was killed.

The floods have begun to spill over into Austria, where a flash flood swept through the town of Hallein late Saturday, although no casualties have been reported.

The military has been deployed to help aid the search and rescue mission and was seen using armoured vehicles to clear away cars and trucks overwhelmed by the floodwaters in Erftstadt, a town southwest of Cologne where the ground in a neighbourhood gave way.