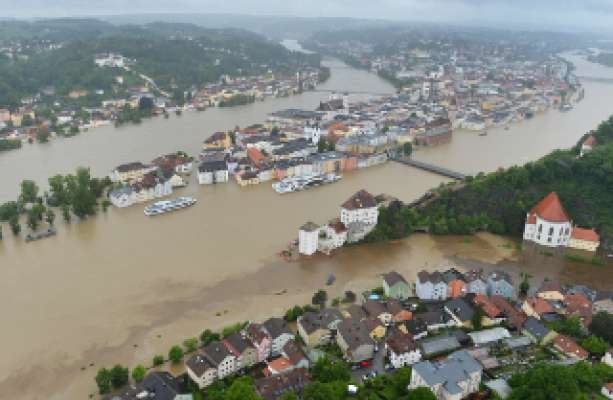 At least 93 people have died and hundreds more are unaccounted for in Germany after some of the worst flooding in decades.

Belgium has also reported at least 12 dead, while the Netherlands, Luxembourg and Switzerland are also affected.

In Germany, the states of Rhineland-Palatinate and North Rhine-Westphalia were the worst-hit.

Scientists have repeatedly warned that human-induced climate change would bring pulses of extreme rainfall such as this one.

In the western German district of Ahrweiler, up to 1,300 people are unaccounted for, the authorities say. A spokeswoman for the local government said mobile networks had been put out of action, making it impossible to contact many people.

The village of Schuld (population 700) was almost entirely destroyed. A major dam near the Belgian border, the Rurtalsperre, is at capacity and overflowing slightly, officials say.

In the town of Erfstadt-Blessem, near Cologne, floodwaters caused a row of houses to collapse. Local authorities said they were receiving emergency calls from people trapped by floodwater but rescue was in many cases not possible.

Scale of damage becoming clear in the Ahr valley

We met an elderly man trying to get into a village which was all but destroyed. His grandchildren were there, he said, but he couldn't get hold of their parents.

Even the authorities say they don't know for sure how many people are missing. There is no phone signal in much of the region, making communication all but impossible. But the death toll is expected to rise today and with every hour that passes the magnitude of this disaster becomes ever clearer.

All along the River Ahr there are flooded homes, broken bridges, the twisted remains of campsites and caravan parks. For many of the dazed people we met surveying the damage here, it's almost impossible to imagine clearing up and starting again.

Some 15,000 police, soldiers and emergency service workers have been deployed in Germany to help with the search and rescue, while helicopters picked stranded residents from roof tops and tanks cleared roads of fallen trees and debris.

Speaking during a meeting with US President Joe Biden in Washington DC, Mrs Merkel expressed her "deepest condolences" and pledge government support for the rescue efforts.

In Belgium, dramatic footage of the floods showed cars being swept away along a street in the city of Verviers. A curfew was in place overnight because of the risk of looting.