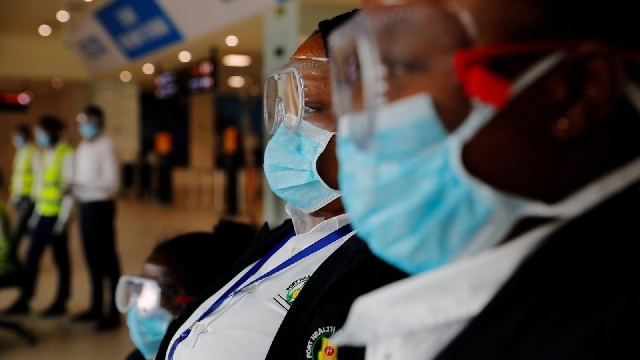 The US remains the worst-hit country, accounting for over a quarter of confirmed cases and a third of deaths.

Experts warn the true number of infections is likely to be far higher, with low testing rates in many countries skewing the data.

Daily death tolls are continuing to drop in some nations, including Spain, but there is concern that easing lockdown restrictions could lead to a "second wave" of infections.

In addition, governments are bracing for economic fallout as the pandemic hits global markets and supply chains.

A senior Chinese official has told local media that the pandemic was a "big test" that had exposed weaknesses in the country's public health system. The rare admission, from the director of China's National Health Commission, Li Bin, comes after sustained criticism abroad of China's early response.

In other recent developments:

The UK government will proceed with "extreme caution" while exiting lockdown restrictions, according to the country's transport secretary. China's president has expressed concern about the threat of the coronavirus to North Korea and offered help. Former US President Barack Obama has strongly criticised Donald Trump over his response to the coronavirus crisis, calling it "an absolute chaotic disaster". Billionaire Tesla boss Elon Musk has said he will move the electric carmaker's headquarters out of California because of local coronavirus restrictions. Two cabinet-level officials in the US are self-isolating after coming into contact with White House staff who tested positive for coronavirus - Robert Redfield, director of the Centers for Disease Control and Prevention, and Stephen Hahn, head of the Food and Drug Administration. Brazilian President Jair Bolsonaro has been criticised for riding a jetski on a lake as the national Congress announced three days of official mourning for victims of the pandemic Health officials in Ghana say more than 500 workers at an industrial facility have tested positive for coronavirus, while the total number of daily cases in the country has jumped by nearly 30% - just a day after authorities said infections had reached its peak.

This week, some lockdown measures have begun easing in Italy, once the global epicentre of the pandemic. Italians have been able to exercise outdoors and visit family members in their region.

France has recorded its lowest daily number of coronavirus deaths for more than a month, with 80 deaths over the past 24 hours. Authorities are preparing to ease restrictions from Monday, as is the government in neighbouring Spain.

Meanwhile, lockdowns are continuing in countries like South Africa, despite calls from opposition parties for it to end.

In South Korea, renewed restrictions are being imposed on bars and clubs after a series of transmissions linked to Seoul's leisure district.

But despite scientific evidence, leaders of several countries have continued to express scepticism about the virus and the need for lockdowns.

British medical journal The Lancet has written a scathing editorial about Brazilian President Jair Bolsonaro, calling him the biggest threat to his country's ability to contain the spread of coronavirus. Brazil is currently reporting the highest number of cases in Latin America - over 10,000 more on Saturday, bringing the national total to nearly 156,000. But despite the outbreak, President Bolsonaro continues to dismiss the virus' severity and has clashed with governors over lockdown measures.

Frustrations about the outbreak turned violent in Afghanistan, and at least six people died during clashes between protesters and security forces. The violence started after demonstrators gathered in Firozkoh, the capital of Ghor province, to complain about the government's perceived failure to help the poor during the pandemic.