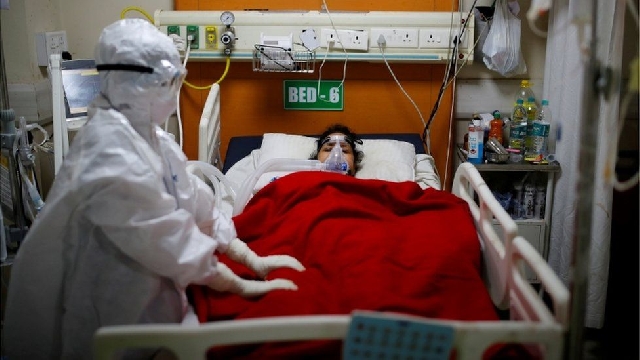 India's medical system is overwhelmed by the crisis

The number of deaths linked to Covid-19 in India has moved past the 300,000 mark as the country continues to grapple with the pandemic.

Experts warn that the real number of fatalities might be much higher as many deaths are not officially recorded.

India has recorded 26 million cases - second only to the US - and is now the epicentre of the global pandemic.

The country is also only the third in the world to record more than 300,000 deaths - behind the US and Brazil.

A deadly second wave in recent weeks has overwhelmed the country's healthcare system, with hospitals struggling to cope with the influx of patients and with critical drugs and oxygen running out.

Nearly half of India's virus deaths occurred in the last three months.

Some experts say the number of daily deaths may rise further. Dr Murad Banaji, a mathematician at Middlesex University London, has been tracking the pandemic closely.

"We expect a delay between cases peaking and deaths peaking. But also, as with cases, we know there are huge variations in death surveillance and recording between states, and between urban and rural areas," he told the BBC.

"Even once recorded fatalities start to fall, we'll need to be wary of reading too much into this until we stop hearing reports of large numbers of rural deaths," Dr Banaji said.

Over the past days, concerns over a rising number of deadly fungus infections linked to Covid treatment have added to the overall crisis.

In some places, even crematoriums have run out of space and have been forced to expand to makeshift sites in public parks.

There are reports of journalists counting bodies at morgues themselves, to try to get a more accurate number. Some models speculate that about a million people may have actually died.

The country's vaccination drive is also not nearly making enough progress to ease the current crisis.