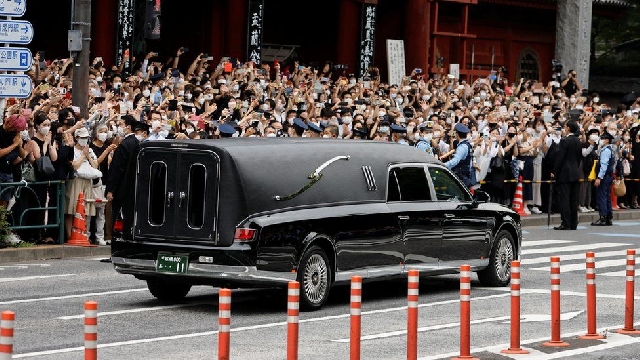 Thousands of mourners lined the streets of Tokyo to pay their last respects to ex-Japanese prime minister Shinzo Abe.

A hearse bearing Abe's body made its way past several landmarks before arriving at the Kirigaya funeral hall in the Shinagawa ward of Tokyo.

The private funeral, which was only open to friends and close family, took place at the Zojoji temple earlier.

The 67-year-old was shot dead last Friday while delivering a campaign speech in Nara in southern Japan.

Across Tokyo, flags are flying at half mast and outside the temple, a long line of mourners, many carrying bunches of flowers, stretched over two blocks.

Some stood with their heads bowed in prayer, some were in tears and others shouted "Thank you Abe" and and "Goodbye Abe" as the motorcade drove past.

Many of them told the BBC that Abe gave them a sense of safety and security - one woman said that during the early days of Covid, when Abe was prime minister, she felt he had dealt with the crisis effectively.

The hearse went past the headquarters of Abe's Liberal Democratic Party (LDP) and made its way to the prime minister's residence, where Prime Minister Fumio Kishida and other lawmakers received the motorcade.

It then passed by parliament building, where Abe first entered as a lawmaker in 1993, before arriving at the funeral hall.

Abe was Japan's longest serving post-war prime minister and one of its most influential politicians.

Police said the gunman targeted him due to grievances he had with a religious group that he believed Abe was a part of.

The attack sent shockwaves through a nation where incidences of gun violence are extremely rare.

A vigil held on Monday evening drew hundreds of dignitaries as well as thousands of ordinary Japanese citizens who came to lay flowers.

"I came here to offer flowers because I think he gave the Japanese something to be proud about," said Emi Osa.

Abe was delivering a campaign speech in support of a candidate for Japan's upper house election when he was shot twice.

Footage of the attack showed the gunman, 41-year-old Tetsuya Yamagami, using a makeshift weapon made of metal and wood and held together by duct tape.

Abe suffered two bullet wounds to his neck and damage to his heart during the attack. He was said to be conscious and responsive in the minutes after the attack, but doctors said no vital signs were detected by the time he was transferred for treatment.

Police are still investigating what the gunman's motives were and whether he acted alone.

The shooting left Japan, a country unaccustomed to gun crimes and political violence, profoundly shaken. On average, there are fewer than 10 gun-related deaths in the country each year.

Guns are extremely difficult to acquire, and mandatory training, extensive background checks and psychological evaluation are required before permits are granted.

US President Joe Biden called Prime Minister Kishida to express his "outrage, sadness and deep condolences", and called the assassination "a tragedy for Japan".