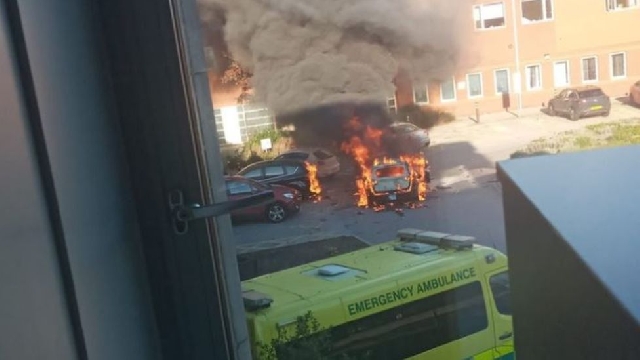 Three men have been arrested under the Terrorism Act after a man was killed in a car explosion outside Liverpool Women's Hospital.

A taxi carrying one passenger pulled up just before 11:00 GMT on Remembrance Sunday, as a national two minutes' silence was due to begin, and exploded.

The passenger was declared dead at the scene and is yet to be formally identified.

The male driver was injured and is in hospital in a stable condition.

Detectives from Counter Terrorism Police North West said three men - aged 29, 26 and 21 - were detained in the Kensington area of the city.

They said they were continuing to keep an open mind about the cause of the blast and were working with Merseyside Police as the investigation continued "at pace". The security service, MI5, is also assisting.

Armed officers have carried out raids on properties on Rutland Avenue near Sefton Park, and around Sutcliffe Street and Boaler Street in Kensington.

Specialist officers remain outside a house on Rutland Avenue, in an operation police say is linked to the explosion.

Police negotiators are on the scene, a fire crew is on standby, and a number of residents have been evacuated.

A large cordon, guarded by uniformed officers, remains in place.

Carl Bessant, whose partner had just had a baby, was inside the hospital at the time of the blast.

"My partner is really shook up to be honest," he said.

"We were so close and she was feeding the baby when it happened. We heard a loud bang and looked out of the window.

"We saw the car on fire and someone jump out... screaming, and there was someone inside the car.

"The hospital shut down, no-one in or out, so they said, but people were using the back entrance."

Prime Minister Boris Johnson said on Twitter: "My thoughts are with all those affected by the awful incident in Liverpool today.

"I want to thank the emergency services for their quick response and professionalism, and the police for their ongoing work on the investigation."

Home Secretary Priti Patel also tweeted she was "being kept regularly updated on the awful incident".