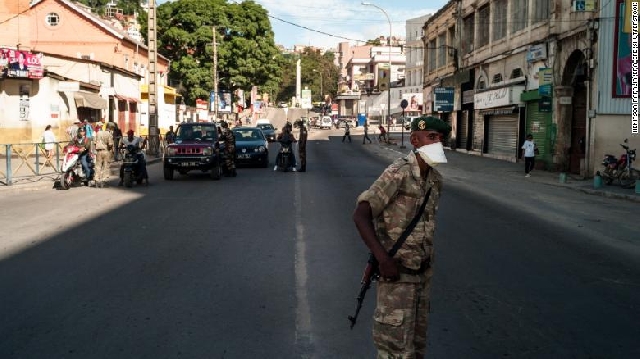 Madagascar has reimposed a lockdown in its central region, which includes its capital Antananarivo, in an effort to tackle an increase in coronavirus cases in the city, according to the country's government.

Schools and universities in the city have been closed and nonessential travel within the region is prohibited until July 20. Authorities say churches will be shut, and public gatherings of more than 50 people have been banned. The government said troops have been deployed to affected districts to ensure residents comply with containment measures, including a curfew in the capital city, the government said. The decision came after the island nation with around 26 million recorded 303 new cases in the region on Saturday bringing the total number to 2,941 coronavirus cases, according to the World Health Organization. More than 23,000 tests have been carried out, according to the country's health ministry. President Andry Rajoelina sent a contingent of doctors and troops to its second largest city, Toamasina, to combat the virus outbreak after two people died of coronavirus and bodies were reportedly found in the city's streets in May. The government had initially locked down the country's two largest cities -- Antananarivo and Toamasina as the virus spread in March. Rajoelina lifted the restrictions four weeks later and began promoting a herbal tonic made in the country, claiming it could prevent coronavirus and cure it though it had not undergone any international clinical trial. The tonic's distribution across the country and to some other governments in Africa sparked controversy and several warnings by the WHO and other experts, who said its efficacy against the virus was unproven.