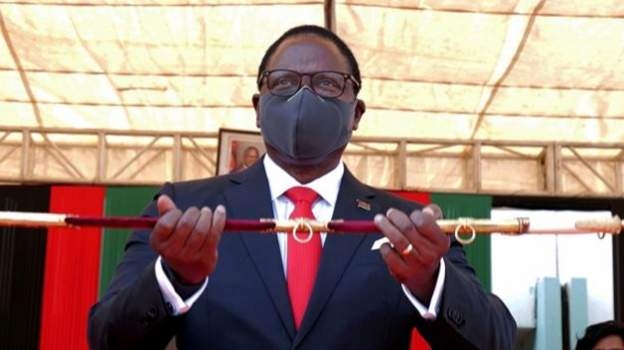 President Lazarus Chakwera has ordered an audit of funds

Malawi's President Lazarus Chakwera has fired the co-chair of a taskforce overseeing government's response to the Covid-19 pandemic, amid allegations over misuse of 6 billion Malawi Kwacha ($7.7m; £5.6m).

The co-chair of the taskforce, John Phuka, and the head of disaster management, James Chiusiwa, were sacked “for showing a lack of toughness in demanding accountability”.

The pair has not responded to the allegations.

The president also suspended 12 other members of the team for failing to maintain proper records of how they used public funds.

The suspensions will pave way for an investigation which will lead to prosecution of culprits, he said.

A report by the country’s ombudsman released in November said there was was lack of transparency and accountability in the implementation of the country's Covid-19 preparedness and response plan.

President Chakwera said he will include representatives of civil societies, the anti-corruption bureau and the Malawi Human Rights Commission into the taskforce.

But the of main opposition party, Democratic Progressive Party (DPP), has faulted the inclusion of the anti-corruption body and rights commission into the team.