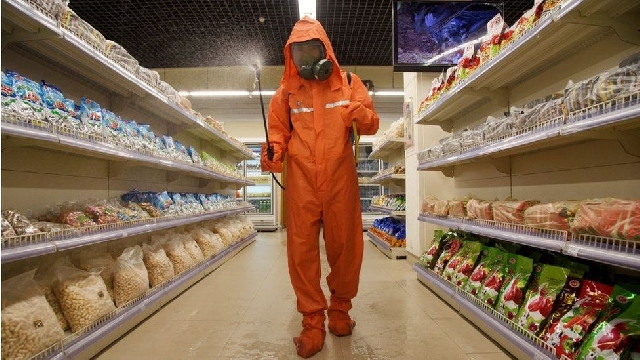 State media have reported an Omicron outbreak in the capital Pyongyang but did not state the number of cases.

KCNA said leader Kim Jong-un had vowed to eradicate the outbreak, which they called a "severe national emergency" that had breached the country's "quarantine front".

But observers believe the virus has long been present in the country.

Outsiders say the nation's 25 million population is vulnerable as North Korea has declined to administer a Covid-19 vaccine programme, even rejecting offers from the international community to supply millions of AstraZeneca and Chinese-made Sinovac jabs last year.

There have also been concerns about North Korea's impoverished healthcare system.

North Korea's main way of combating Covid has been to seal its foreign borders - it was one of the first countries to do so in January 2020.

But this has also stopped essential supplies from entering the country, which has led to food shortages and a cratering economy.

On Thursday KCNA said Mr Kim had ordered "maximum emergency" virus controls, which appeared to include orders for localised lockdowns and gathering restrictions in workplaces.

The North Korean news outlet added that the first case of the Omicron variant had been reportedly detected in the capital four days ago.

Residents in some areas of Pyongyang had been subjected to lockdown for at least two days prior to the latest announcement, according to NK News, a Seoul-based monitoring site.

South Korea's government said it has renewed its offer of humanitarian assistance to the North in response to the news of the outbreak. Pyongyang has yet to respond.