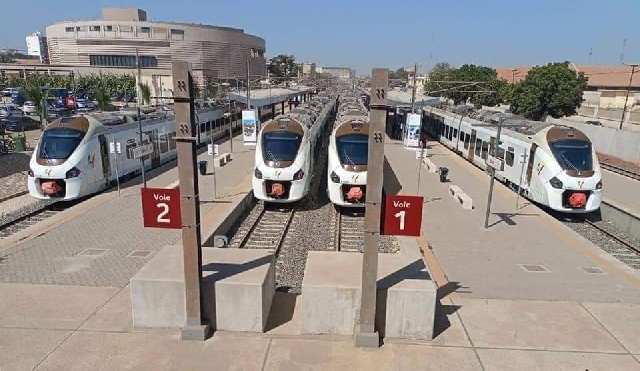 The Train Express Regional (TER) is an airport rail link that connects Dakar and Blaise Diagne International Airport in Senegal.

After five years and several false starts, the Dakar Regional Express Train was on Monday, December 27 opened to passengers.

The first train took off at 14 15 for the inaugural trip between Darkar and Diaminiado. Though it had been initially announced that the 35-kilometre route would take 20 minutes, it took an hour and fifteen minutes to reach its destination.

Though contrary to what has earlier been announced, some commuters were happy about its efficiency.

"What I like most is the reduction in traffic jams and the time people used to waste on the road."

"Now, any inhabitant of Dakar who is going to leave the suburbs can get to the city centre in record time with a level of safety that we could not imagine."

With a frequency of 6 trains per hour and a speed of 16 km/h, the TER will initially serve 13 stations between Dakar and the new town of Diamniadio.

The state-owned railway line is part of President Macky Sall’s plan to revamp the nation’s infrastructure by 2035.

In a tweet, the Senegalese president said, "This December 27, 2021 marks a historic step in our collective march towards an emerging Senegal. A new dawn is dawning on our dear country."

The trains will transport 115,000 passengers per day aiming at reducing vehicular congestion in the city.

The 1.3 billion commuter railway will link up with express buses, which will operate on reserved lanes on a toll highway that has been in operation for a decade.

Ahead of Monday’s inauguration, thousands of residents in Darkar threatened to disrupt the inauguration claiming they have not been properly compensated for homes and businesses that were demolished to make way for the project.

“We plan to block the start of the TER on the day of the inauguration to demand satisfaction for our grievances,” said Ibrahima Cisse, who leads a group of some angry residents.

Many are also furious that the relocation they were promised has not yet been done.

Yatma Dieye of Apix told AFP “98.8 per cent of people affected by the project have been compensated.”

“Payments began in February 2017. Everything was transparent and done according to international standards,” he said.

The government says that almost everyone who is owed compensation has received it but accepts that some resettlements have not yet happened.