Shinzo Abe: Why a state funeral for slain ex-PM is controversial 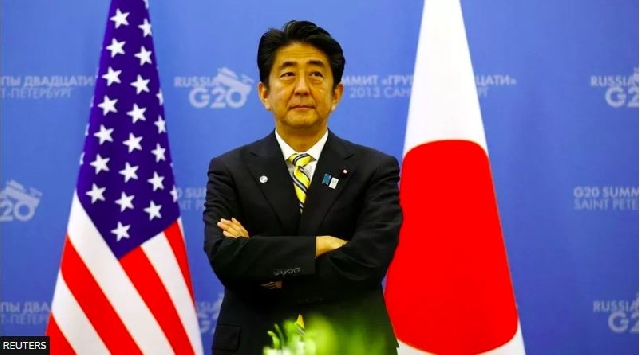 A week ago, the global "great and good" were gathered in London for the state funeral of Britain's Queen Elizabeth II. Now many of them are heading to the other side of the world for another state funeral - for Japan's slain former prime minister Shinzo Abe.

In the last few weeks opposition to the state funeral has been growing. Polls suggest more than half of the country's population is now against holding it.

Earlier this week, a man set himself on fire near the prime minister's office in Tokyo. And on Monday around 10,000 protestors marched through the streets of the capital demanding the funeral be called off.

But, on the other hand, the event is drawing Japan's allies from across the globe. US President Joe Biden will not attend, but his vice-president Kamala Harris will. Singapore's prime minister Lee Hsien Loong is coming.

So is Australian PM Anthony Albanese, along with three of his predecessors. Indian Prime Minister Narendra Modi skipped the Queen's funeral but is flying to Tokyo to pay his respects to Abe.

What does it say about Abe that - even as world leaders gather for his funeral - many in his own country are opposed to it?

First off, this is not a normal event. In Japan, state funerals are reserved for members of the Imperial Family. Only once, since World War Two, has a politician been given this honour, and that was all the way back in 1967. So, the fact that Abe is being given a state funeral is a big deal.

In part it's because of the way he died - he was gunned down at an election rally in July. And Japan mourned for him. He had never been hugely popular, according to opinion polls, but few would deny that he brought the country stability and security.

So the decision to hold a state funeral for him is also a reflection of his stature. No-one served longer in the prime minister's office and, arguably, no other post-war politician had such an impact on Japan's position in the world. 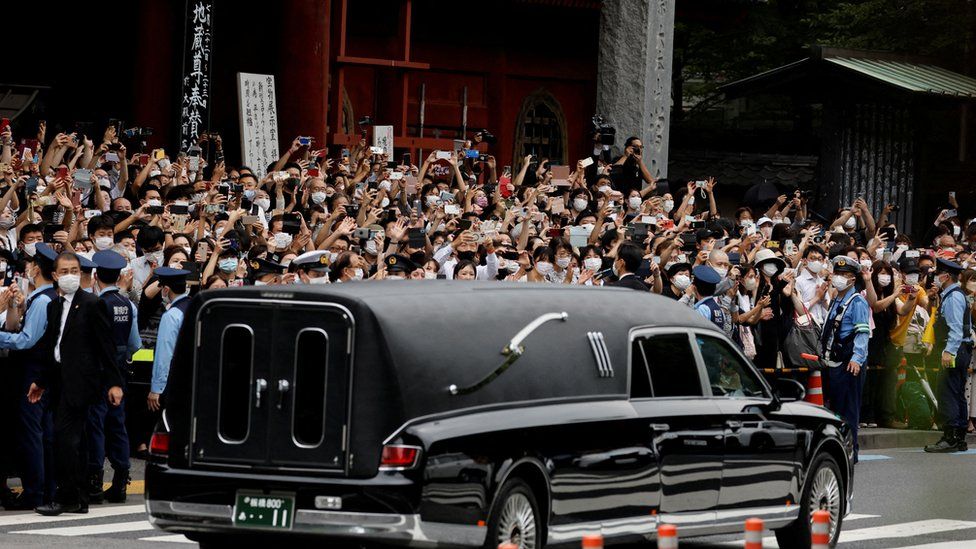 "He was ahead of his time," says Professor Kazuto Suzuki, a political scientist and former Abe advisor.

"He understood the changing balance of power. That a rising China will, of course, distort the balance of power and reshape the order in the region. So, he wanted to take leadership."

Professor Suzuki points to the Trans-Pacific Partnership (TPP), President Barack Obama's big plan to bring all of America's allies in the Asia Pacific together in one giant free trade zone.

In 2016, when Donald Trump pulled the US out of the TPP, everyone expected it to collapse. But it didn't.

Abe took over leadership and created the even more confusingly named Comprehensive and Progressive Agreement for Trans-Pacific partnership, or CPTPP.

It's a terrible name but it signalled a new willingness for Japan to take the lead in Asia. He also played a key role in the creation of Quad, an alliance between the US, Japan, India and Australia.

Even more significant are the changes Abe made to Japan's military.

In 2014 the then prime minister forced through legislation that "re-interpreted" Japan's pacifist post war constitution.

It allowed Japan to exercise "collective self-defence". That means for the first time since World War two, Japan is able to join its US ally in military action beyond its own borders.

The legislation was hugely controversial, and the ripples are still being felt today. The thousands who marched in Tokyo against the state funeral accuse Abe of leading Japan towards war.

"Abe passed the collective self-defense bill," protestor Machiko Takumi said. "It means Japan will fight with the Americans, which means he made Japan able to go to war again, that's why I oppose a state funeral."

Japan is a country traumatised by war. But it's not just memories of atom bombs that make people angry about Abe. 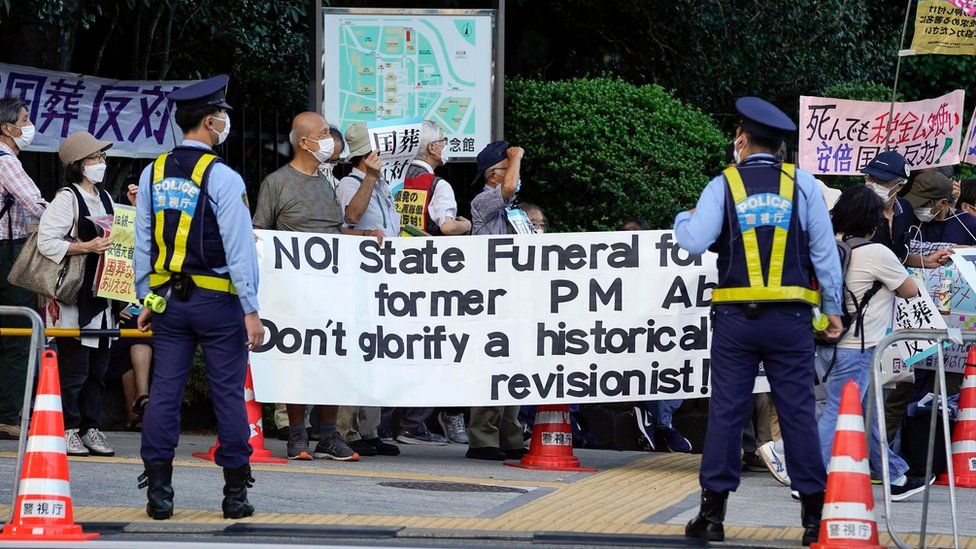 Those opposing the state funeral say Abe was a warmonger

Japan's post-war constitution clearly states that the country "renounces the right to wage war". If he wanted to change that Abe should have called a referendum. But he knew he would lose. Instead, his law "re-interpreted" the meaning of the constitution.

But to his supporters all of this misses the point. Before any other world leader, Abe saw the rising threat from China, and decided Japan had to become a fully paid-up member of the US-Japan alliance.

"Abe had a very futuristic vision," says his former advisor Mr Suzuki. "He saw that China will rise, and the United States will retreat from the region. In order to keep the United States involved in this region, he realised we need to have the power to defend ourselves."

A rearmed and capable Japan is certainly welcomed by Washington, and by many other countries in Asia, who are equally worried about China.

Abe found willing partners in Canberra and Delhi. When he was killed, Mr Modi declared a national day of mourning in India.

But there is one place where Abe is not being mourned - where he was repeatedly condemned as a warmonger and revisionist.

That place is China. It may explain why Beijing sent vice president Wang Qishan to London but is sending a former science and technology minister no-one outside of China has ever heard of to Tokyo.