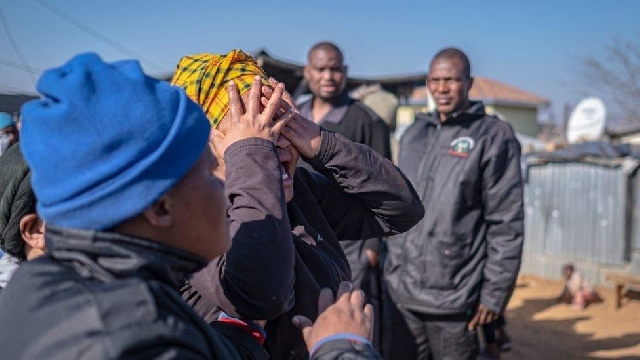 Relatives of victims have been mourning outside the tavern

At least 15 people have been shot dead in a bar in the South African township of Soweto, police say.

Police said gunmen entered the Orlando East tavern in the early hours of Sunday morning and started firing randomly at a group of young people.

They then fled the scene in a white minibus. No motive for the attack has been established, police said.

Several more people are in a critical condition in hospital, the BBC's Nomsa Maseko reports.

The victims are believed to be between 19 and 35 years old.

"Bodies were on top of each other with blood all over. We were looking for our loved ones, we had to jump over bodies looking for our brothers," said local resident Ntombikayise Meji.

Gauteng province's head of police, Lt-Gen Elias Mawela, told the BBC the shooting appears to have been "a cold-blooded attack on innocent tavern patrons".

A press statement released by his office said the gunmen had been armed with rifles and 9mm pistols when they entered the bar.

Police are searching for the suspects, whose identities remain unknown, it said.

Thaban Moloi, a community leader in Soweto, was angered by the amount of time it took police to arrive at the scene.

"It's terrible, I'm telling you. People don't know what to do. If you were there you could see women and children crying," he said.

"It took five hours for them to come, honestly," he said.

Four other people were killed in a separate tavern shooting in the south-eastern province of KwaZulu-Natal, police said on Sunday.

President Cyril Ramaphosa expressed his condolences to the relatives of victims of both shootings.

"As a nation, we cannot allow violent criminals to terrorise us in this way, regardless of where such incidents may occur," he added.

Shootings are not uncommon in South Africa. They are often linked to gangs or alcohol.

But this is an exceptionally high death toll and comes soon after the death of 21 teenagers thought to have been either gassed or poisoned at another bar in the city of East London.