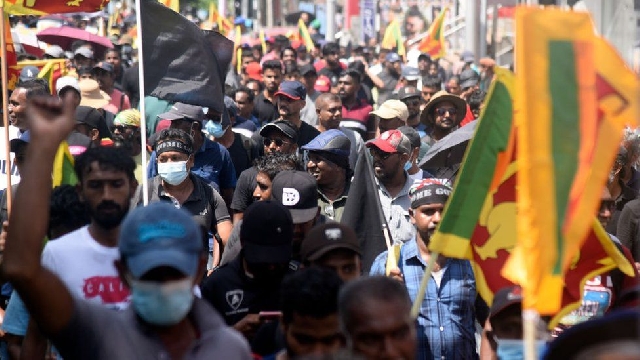 Thousands of protesters have stormed President Gotabaya Rajapaksa's residence in the capital of Sri Lanka.

Demonstrators from all over the country marched to Colombo demanding his resignation after months of protests over mismanagement of the country's economic crisis.

Reports say he has already been moved to a safer location.

The country is suffering rampant inflation and is struggling to import food, fuel and medicine.

Thousands of anti-government protesters travelled in cars, vans and buses to the capital, with officials telling AFP news agency that some had even "commandeered" trains to get there.

Police fired shots in the air to try and prevent angry crowds from overrunning the residence, but were unable to stop some of the crowd from entering.

"The president was escorted to safety," a senior defence source told AFP. "He is still the president, he is being protected by a military unit."

Facebook livestream footage from inside the building showed hundreds of protesters packing into rooms and corridors, while hundreds also milled around the grounds outside.

BBC footage showed scores of protesters taking a dip in the palace pool.

Police also failed to stop protesters from entering the president's office, which has been the focus of demonstrations for months.

Authorities had attempted to stop the demonstration from taking place by imposing a curfew on Friday night. But protesters were undeterred, and the curfew was lifted after civil society groups and opposition parties strongly objected to it.

Prime Minister Ranil Wickremesinghe has summoned an emergency meeting of leaders of Sri Lanka's political parties to discuss the crisis. He is also asking the Speaker to convene parliament.