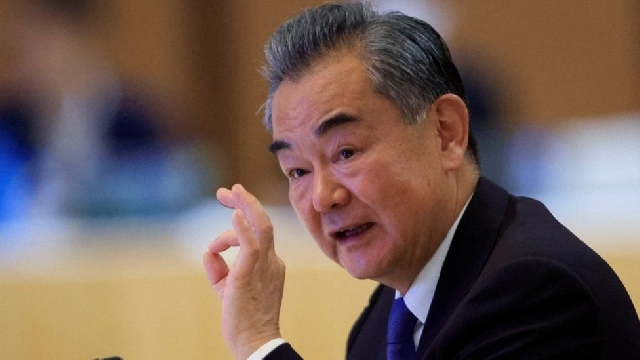 At a meeting of Southeast Asian countries, Wang Yi defended China's military drills in the seas around Taiwan, held in response to the visit.

Ms Pelosi made a brief but controversial stop on the island on Wednesday, during a tour of the region.

China reacted by launching its biggest ever military exercises in the region.

Ms Pelosi is the most senior US politician to visit the island in 25 years.

Her decision to stop at the island has enraged Beijing, which considers Taiwan to be a breakaway province of China.

The US does not officially recognise Taiwan, but it does maintain a strong relationship with the island, which includes selling weapons for Taiwan to defend itself.

Speaking during a meeting of Southeast Asian foreign ministers in Cambodia's capital Phnom Penh, Mr Wang said his country had done all it could to avoid a crisis but that it could "not allow its core interests to be hurt".

His comments came after Southeast Asian foreign ministers had earlier warned that growing tensions over Taiwan could spark open conflict in the region.

A statement from the Association of South East Asian Nations (Asean) called for maximum restraint and urged against any provocative action.

It said that recent developments could lead to "miscalculation, serious confrontation, open conflicts and unpredictable consequences among major powers".

Mr Wang said Taiwan would "eventually return to the embrace of the motherland".

The Chinese government has threatened to eventually seize the island by force if other attempts at unification are unsuccessful.

Russia - which maintains good relations with Beijing - said China had the "sovereign right" to hold the drills.

"The tension in the region and around Taiwan was provoked...by the visit of Nancy Pelosi," Kremlin spokesman Dmitry Peskov said on Thursday.

China and Taiwan: The basics Why do China and Taiwan have poor relations? China sees the self-ruled island as a part of its territory and insists it should be unified with the mainland, by force if necessary How is Taiwan governed? The island has its own constitution, democratically elected leaders, and about 300,000 active troops in its armed forces Who recognises Taiwan? Only a few countries recognise Taiwan. Most recognise the Chinese government in Beijing instead. The US has no official ties with Taiwan but does have a law which requires it to provide the island with the means to defend itself

Following her visit to Taiwan, Ms Pelosi has since travelled to visit South Korea as part of an official four-country tour which also includes Singapore, Malaysia and Japan.

In Seoul she met with National Assembly Speaker Kim Jin-pyo where concerns over North Korea's nuclear and missile threats were discussed.

She is also expected to visit the heavily fortified border with North Korea - known as the Demilitarized Zone (DMZ) - according to reports.