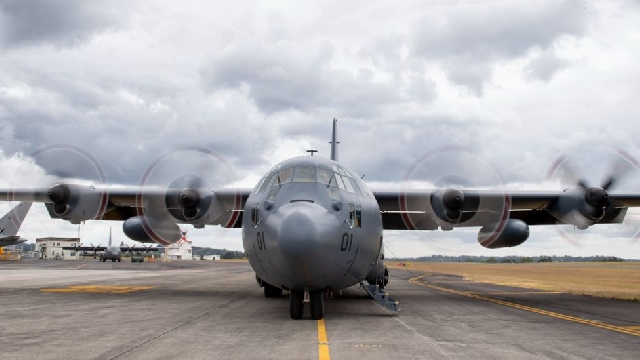 The first foreign aid planes have arrived in Tonga, bearing much-needed supplies for the Pacific nation which was left devastated by a volcanic eruption and subsequent tsunami on Saturday.

Australia also confirmed the first of its relief planes had arrived.

Aid efforts had initially been hampered by ash from the volcano.

At least, three people have died and communications have been crippled, and Tonga has only just begun to re-establish global contact after five days cut off from the rest of the world.

Australia said the first of its two Boeing C-17 Globemaster relief planes also had a "sweeping" device on board to help keep the runway clear.

Rescue teams and hundreds of volunteers had for days desperately worked to clear the thick layer of ash at the airport runway in the capital Nuku'alofa that had prevented planes from landing.

"After the eruption, all of Tonga just turned grey," Tongan journalist Marian Kupu told the BBC from the capital Nuku'alofa. "We're talking about dogs and cars and buildings, they were all covered in ashes."

Ms Kupu said the thickness of the ashfall made clearing the runway "difficult", and posed a possible health threat to those engaged with the task, who were "mainly young boys".

Both Australian and New Zealand authorities have confirmed that the aid drops will be contactless, to prevent the risk of Covid spreading to the island which has seen just one case of the virus so far in the pandemic.

"The aircraft is expected to be on the ground for up to 90 minutes before returning to New Zealand," said New Zealand's Defence Minister Peeni Henare.

Rear Adm Gilmour said no-contact Covid protocols were "being adhered to rigorously", adding that relief procedures would include making sure the airplane crew would have no contact with anyone on the ground, and that everyone would be wearing personal protective equipment (PPE).

"We are very respectful that the last thing that Tonga would need now is a Covid outbreak on top of this disaster," he added.

Australia has also said no personnel would disembark from their planes.