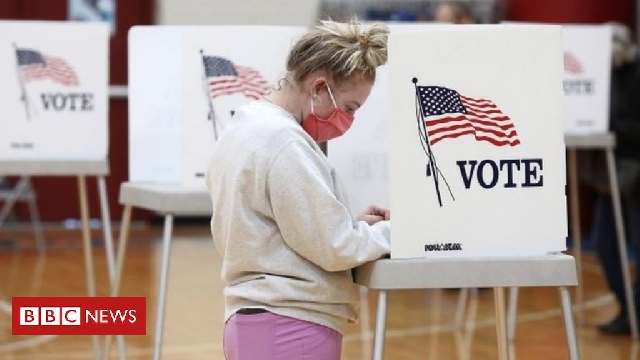 US federal election officials have said the 2020 White House vote was the "most secure in American history", rejecting President Donald Trump's fraud claims.

"There is no evidence that any voting system deleted or lost votes, changed votes, or was in any way compromised," a committee announced.

They spoke out after Mr Trump claimed without proof that 2.7 million votes for him had been "deleted".

He has yet to concede to the president-elect, Democrat Joe Biden.

The result of the 3 November election was projected by all the major US TV networks last weekend.

The BBC now projects that Mr Biden has won Arizona, extending his lead by 11 electoral college votes - he now has 290, with Mr Trump on 217. It is the first time the state has voted Democrat since 1996.

Mr Trump has launched a flurry of legal challenges to projected results in key states and levelled unsubstantiated allegations of widespread electoral fraud.

Why is the statement important?

The announcement marks the most direct rebuttal from federal and state officials of President Trump's unsubstantiated claims of election fraud.

Thursday's joint statement was released by the Election Infrastructure Government Co-ordinating Council - which is made up of senior officials from the Department of Homeland Security and the US Election Assistance Commission as well as state-level officials who oversee elections and representatives of the voting machine industry.

"The November 3rd election was the most secure in American history. Right now, across the country, election officials are reviewing and double checking the entire election process prior to finalizing the result," the group said.

"While we know there are many unfounded claims and opportunities for misinformation about the process of our elections, we can assure you we have the utmost confidence in the security and integrity of our elections, and you should too," it added, without naming Mr Trump directly.

"When you have questions, turn to elections officials as trusted voices as they administer elections."

The statement was posted to the website of the Cybersecurity and Infrastructure Security Agency (Cisa), which is part of the Department of Homeland Security.

On Thursday, Mr Krebs shared a post by an election law expert that said: "Please don't retweet wild and baseless claims about voting machines, even if they're made by the president."

Cisa assistant director Bryan Ware stepped down on Thursday. The White House had asked for his resignation earlier this week, Reuters reports. Mr Krebs expects to be fired, the news agency says.

Hours before the statement was released, Mr Trump tweeted that voting software used in 28 states had deleted millions of votes for him, but presented no evidence for the stunning claim, which appeared to originate from the obscure TV network One America News.

The claim was linked to miscounting of votes in one Michigan county which initially favoured Mr Biden but was later corrected in President Trump's favour on 6 November. State election officials acknowledged what had happened, saying human error was to blame, rather than a software malfunction.

In a separate development, former President Barack Obama - a Democrat - said senior Republicans were undermining democracy by going along with President Trump's claims of fraud.

"It's one more step in delegitimising not just the incoming Biden administration, but democracy generally, and that's a dangerous path," he told CBS News ahead of the release of his new memoir, A Promised Land.

A small but growing number of Republicans are backing calls for the president-elect to be given daily intelligence briefings.

Senator Lindsey Graham, a key Trump ally, was among those saying Mr Biden should start receiving the secret presidential memo, as is usual with incoming presidents.

Between 10 and 20 Republicans in Congress have now either congratulated Mr Biden or accepted there must be moves towards a transition. But most have yet to acknowledge the president-elect's win.

The Democrats' House Speaker Nancy Pelosi said the "absurd circus" meant the coronavirus pandemic was being neglected, and she and other top Democrats urged Republicans to "accept reality".

Democratic Senator Chris Coons told CNN some Republicans had been asking him to congratulate Mr Biden on their behalf because they did not feel able to do so publicly.

The Democratic Senate minority leader Chuck Schumer said Republican politicians were "deliberately casting doubt on our elections for no other reason but fear of Donald Trump".

Capitol Hill reporters say Republican lawmakers are anxious not to alienate the Trump base, given that the president just won more votes than any incumbent ever, even though he is projected to lose.

Party bigwigs are also said to be hoping that Mr Trump will help campaign for two Senate run-off elections in January in Georgia that will decide whether Republicans retain control of the upper chamber.

Mr Biden is 5.3 million votes ahead of Mr Trump - about 3.4% - and has enough electoral votes needed in the state-by-state Electoral College to take the presidency.

President Trump has kept a low key public profile since the election. Reports suggest he has told friends he wants to start a digital media company to take on the conservative network Fox News, whose full support he now feels to be lacking.

According to CBS News, Mr Trump is also openly discussing a possible 2024 campaign to retake the presidency.

What has Biden been up to?

On Thursday he spoke with Pope Francis, who offered his "blessings and congratulations". Mr Biden will be only the second Roman Catholic president of the US.

He also spoke with congressional Democratic leadership about the need for a coronavirus stimulus package as the daily US caseload from the disease soared to a new record of more than 150,000.

He spent the day huddled with his transition team in Wilmington, Delaware, where he had been planning cabinet appointments.

On Wednesday he picked veteran Democratic operative Ron Klain to be his White House chief of staff.