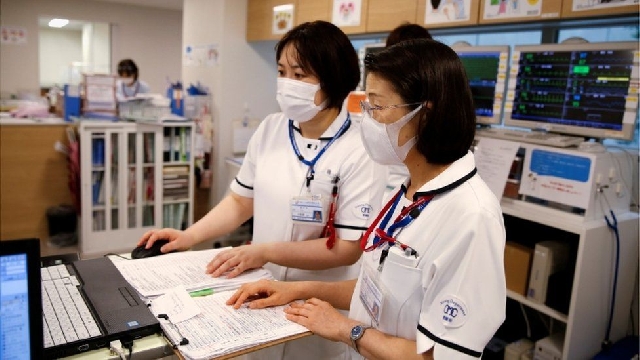 Japan's medical system is struggling to cope with Covid-19

The US has issued a travel warning for Japan over the country's Covid-19 surge, amid heightened scrutiny just weeks before the Tokyo Olympics.

But US Olympic officials have said they are confident their athletes will be able to take part safely in the Games.

Japan already bans most travellers from entering the country.

It long had low numbers of Covid cases but is now seeing a fresh wave of infections pushing the healthcare system in some cities to its limit.

The US Center for Disease Control (CDC) said "travellers should avoid all travel" to the country, warning that in the "current situation in Japan even fully vaccinated travellers may be at risk for getting and spreading" Covid variants.

Largely due to the global pandemic, the US currently has 151 countries at level four, its highest alert level, including most of Europe where large sports events go ahead under special Covid restrictions.

Japan currently does not allow any tourists or business travellers into the country for fear of new strains of the virus. The Japanese ban includes people coming from the US being "denied permission... unless there are exceptional circumstances".

Large parts of the country are currently under a state of emergency to give regional authorities more power to enforce measures against the pandemic.

Despite the growing crisis, the Tokyo Olympics are still scheduled to go ahead on 23 July after having been postponed from last year.

Public opinion in the country has seen a vast majority of people calling for the Games to be cancelled though, or postponed a second time. The International Olympic Committee (IOC) has ruled out both those options.

The United States Olympic & Paralympic Committee (USOPC) said the travel warning saying it would not affect their participation.

"We feel confident that the current mitigation practices in place for athletes and staff by both the USOPC and the Tokyo Organising Committee, coupled with the testing before travel, on arrival in Japan, and during Games time, will allow for safe participation of Team USA athletes this summer," it said in a statement.

Japanese officials on Tuesday have responded to the US travel advisory, saying they did not expect it to have any impact.

"We believe that there is no change in the US position to support the Japanese government's determination to realise the hosting of the Tokyo Olympics and Paralympics," said chief cabinet secretary Katsunobu Kato.

No foreign travellers are allowed to attend the Games, and the Japanese government is also not ruling out the option of holding the event without any spectators, should the Covid situation get worse.

Lagging behind other developed nations in its vaccination efforts, Japan on Monday kicked off a mass vaccination programme in Tokyo and Osaka, the two cities which have been hit hardest by the new surge in infections.

So far, only about 1.9% of the population is fully vaccinated. Authorities hope that by the end of July, at least those aged 65 and above will have completed their vaccinations.