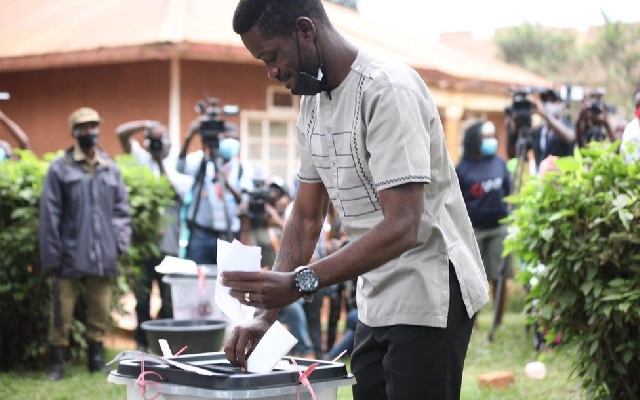 The internet has been cut off in Uganda as voters cast their ballots in a hotly contested election.

A 38-year-old singer is challenging Yoweri Museveni, 76, in one of the world's youngest countries.

Robert Kyagulanyi, known by his stage name Bobi Wine, says he represents the country's younger generation, while Mr Museveni says he is standing for stability.

Dozens of people have been killed in the run-up to the election.

What is the latest?

Some polling stations did not open for close to two hours and voters in the queue had grown angry and had started shouting at the polling gate officials, the BBC's Patience Atuhaire reports from the capital, Kampala.

She said the cause of the delay was not clear.

Reuters news agency reports that, at the six polling stations where their reporters observed delays, the ballot papers had not arrived.

Polls are due to close at 16:00 local time (13:00 GMT) but will remain open until everyone in the queue at the time of closing has voted, our correspondent adds.

Results are not expected before Saturday.

What security measures have been put in place?

Ugandan police promised they would deploy officers on rooftops of the capital Kampala on polling day, which they say comes after opposition activists commanded protests from rooftops in November, when more than 50 people were killed after Bobi Wine was arrested.

"If you try to disturb peace, you will have yourself to blame. The security forces, following the law, are ready to deal with any troublemaker," he said in a televised speech wearing military fatigues.

How bad was the violence during the campaign?

Violence has been at an unprecedented level.

Security forces cracked down on gatherings ahead of the election and dozens have been killed.

The government says the ban on gatherings was to prevent the spread of coronavirus while the opposition say it was a smokescreen for repression.

Bobi Wine and others out of the 10 opposition candidates have been arrested on several occasions.

Will the vote be free and fair?

It depends who you ask.

The government has previously said the election would be free and fair.

But the US cast doubt over the electoral process and withdrew its election observers after most of its accreditation requests were denied.

In response, Mr Museveni's spokesman Don Wanyama tweeted that there were observers from the African Union and East African Community.

"I don't remember when Uganda last sent election observers to the US," he added.

Bobi Wine has called on voters to remain at polling stations on Thursday and use their mobile phone cameras to record the tallying process in an effort to prevent vote rigging.

Who is Yoweri Museveni?

Mr Museveni is standing for a sixth elected term in office, as leader of the National Resistance Movement (NRM).

He came to power on the back of an armed uprising in 1986 and has long been depicted to Ugandans as a liberator and peace bringer.

But he has managed to maintain his grip on power through a mixture of encouraging a personality cult, employing patronage, compromising independent institutions and sidelining opponents, says the BBC's Patience Atuhaire.

Who is Bobi Wine?

Bobi Wine is widely thought to be the strongest of the 10 opposition candidates in the presidential race.

The 38-year-old reggae star is known by his supporters as the ghetto president.

Over the last two decades Bobi Wine's musical output has been filled with songs about these issues and they have inspired a fervent following.

He grew up in Kampala's Kamwokya slum where he went on to build his now world-famous recording studio.