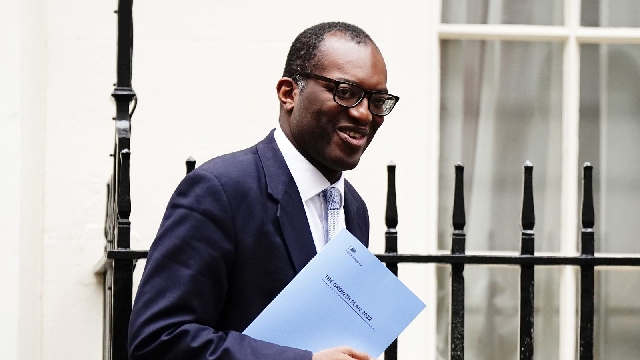 The devolved governments of the UK want an urgent meeting with Chancellor Kwasi Kwarteng to discuss immediate action to reverse the damaging effects of the mini-budget.

In a joint letter, the finance ministers of Wales, Scotland and Northern Ireland are warning that the government's spending plans are a "huge gamble" that will mean another decade of austerity.

It comes as one of Liz Truss's closest political allies doubled down on the government's economic policy, with warnings that major cuts in public spending are to come.

Levelling Up Secretary Simon Clarke, who is among the prime minister's inner circle, told The Times that the British people need to expect significant cuts in public spending, because for too long the West has been living in a "fool's paradise".

Following on from Chancellor Kwasi Kwarteng's tax-cutting mini-budget, he said the government needs to make sure the "extremely large" state is in "full alignment with a lower tax economy".

It has led to fears another period of austerity is just around the corner, with the hardest hit likely to be those reliant on welfare.

In their letter to Mr Kwarteng, Welsh Finance Minister Rebecca Evans joined finance ministers from Scotland and Northern Ireland in highlighting the profound impact of "the largest set of unfunded tax cuts for the rich in over 50 years" stating it was "a huge gamble on public finances and the health of our economy"

They warned against being condemned to another decade of austerity and expressed deep concern over reports that UK government departments would be asked to make spending cuts to balance the budget, which may have profound consequences for devolved budget settlements already eroded by inflation.

But Mr Clarke told The Times: "Western Europe is just living in a fool's paradise whereby we can be ever less productive relative to our peers, and yet still enjoy a very large welfare state and persist in thinking that the two are somehow compatible over the medium to long term.

"They're not. We need to address that... if we want those strong public services then we are going to have to pay for them.

"It is important that we look at a state which is extremely large, and look at how we can make sure that it is in full alignment with a lower tax economy."

It comes on the eve of the Conservative Party conference and the chancellor defending his mini-budget by saying the government "had no other choice" than to do "something different" to spark the economy.

The mini-budget resulted in a tumultuous week which saw the pound fall to an all-time low against the dollar and the Bank of England being forced to spend billions to prevent a collapse of the pensions industry.

'What the Thatcher government was doing in the 1980s'

Mr Clarke admitted it had been an "uncomfortable week" and defended Ms Truss, but said she would not be deflected from policies they predicted would be unpopular, and suggested her task was analogous to that faced by Margaret Thatcher in the 1980s.

"If I was to describe one word for Liz... it is purposeful," he said. "She knew - and this was certainly something we discussed during the summer - that this would not be a comfortable process.

"[She knew] particularly early on, there would be real potential unpopularity to be courted in seeking to say things and do things which weren't going to be easy or quick wins. Frankly, she is doing what she believes is right.

"In some ways, there is an analogy with the 1980s and what the Thatcher government was seeking to do in terms of a reset moment where you fundamentally revisit how not just the previous government but multiple governments."

'We intend to be extremely rigorous'

Wales Secretary Sir Robert Buckland told Sky News that, while the government would work within its existing three-year spending review package, families could expect to find out what ministers are planning in the next few weeks.

Mr Buckland said he hopes the government's upcoming announcements will be seen by the market as displaying "fiscal discipline".

He appeared to confirm what Mr Clarke was suggesting when he said: "We intend to be extremely rigorous when it comes to bearing down on public expenditure.

"That will be developed in the weeks ahead. We've got a whole range of announcements coming out on not just spending, but supply-side reforms.