Wisconsin: Parade incident driver to be charged with homicide 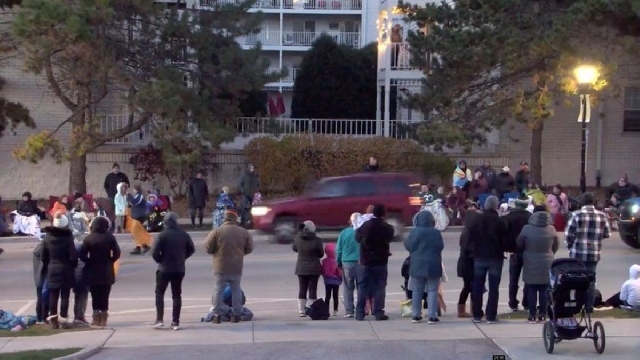 Wisconsin officials will seek to charge a driver who ploughed into a Christmas parade on Sunday with five counts of intentional homicide.

Police said Darrell Edward Brooks Jr, 39, killed five people, aged between 52 and 81, and injured 48 others, including young children, in Waukesha.

Mr Brooks was fleeing a domestic disturbance when he mowed into the crowd, they said.

They added he could face further charges based upon their investigation.

Waukesha police also said the incident was not an act of terrorism.

Several school children and grandparents were among the victims.

The victims named on Monday were:

They include members of the Milwaukee Dancing Grannies, who are a regular fixture in the city's parades.

"Our group was doing what they loved, performing in front of crowds in a parade putting smiles on faces of all ages," the group wrote in a statement on Facebook. "Those who died were extremely passionate Grannies."

Dozens of people remain in hospital. Police said the injured were taken to six area hospitals by first responders as well as other residents who were at the parade.

Eighteen children were admitted after the incident, the Children's Wisconsin paediatric hospital told reporters on Monday.

The injured range in age from three to 16 and include three sets of siblings, medical staff said. Ten children required treatment in the intensive care unit.

The Roman Catholic Archdiocese of Milwaukee said one of its priests, multiple parishioners and students at a local Catholic school were also among the injured.

What do we know about the suspect, Darrell Brooks?

"A lone subject intentionally drove his maroon SUV through barricades and into a crowd of people that was celebrating the Waukesha Christmas parade," city police chief Dan Thompson told reporters at a news conference on Monday.

He added that an officer had fired shots at the vehicle, but had to stop due to the number of people on the street.

Police said they were responding to a domestic incident involving Mr Brooks when he fled the scene and mowed through the parade crowd. Earlier media reports suggested he was escaping a knife fight, but police have not confirmed those details.

The Milwaukee Journal Sentinel newspaper reported Mr Brooks is currently facing at least five other criminal charges - including for domestic abuse and battery - and had been released from jail on bond just two days earlier. BBC News has also reviewed the records belonging to the suspect.

In a statement on Monday, Milwaukee County District Attorney John Chisholm, a Democrat, said the bail recommendation in Mr Brooks' open court case was "inappropriately low in light of the nature of recent charges and the pending charges" against him.

Mr Brooks is from the city of Milwaukee, about 24 km (15 miles) east of Waukesha.

The parade in Waukesha - a community of about 72,000 located to the west of Milwaukee - is traditionally held every year on the Sunday before Thanksgiving, and includes fancy dress, floats, dancers and marching bands. This year's theme was "comfort and joy".

Families lined the sides of the road to watch the event, which was returning after a year's absence due to the coronavirus pandemic.

Local resident Angelito Tenorio told the Journal Sentinel he had just finished marching in the parade when the SUV "put the pedal to the metal and just [started] zooming full speed along the parade route" at about 16:40 (22:40 GMT) on Sunday.

"Then we heard a loud bang, and just deafening cries and screams from people who are struck by the vehicle," he said.

Corey Montiho, whose daughter's dance team was hit by the SUV, told the paper: "There were pom-poms and shoes and spilled hot chocolate everywhere. I had to go from one crumpled body to the other to find my daughter."

Sarah Saldivar, who was at the parade with her two young children, told CBS News she saw "a red blur" and then saw "little girls flying through the air".

One video shared on social media shows the car crashing at high speed through street barriers, while another shows the vehicle driving into what looks like a group of musicians.

Police officers ran down the street during the incident, telling people to take shelter in shops.

"I am deeply saddened to know that so many in our community went to a parade but ended up dealing with injury and heartache," he said.

President Joe Biden said he was praying for the community and "monitoring the situation very closely".

Wisconsin Governor Tony Evers has ordered flags to be flown at half-staff across the state in honour of the victims.

Waukesha's public schools were closed on Monday, and counselling services were made available to those affected.

A community fund has been created to help victims of the incident.