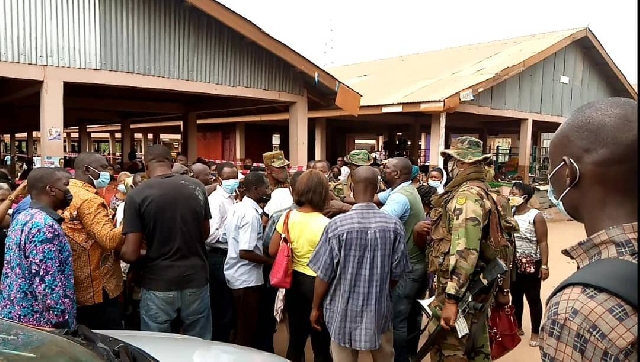 The traders during the protest

Some traders at the Afia Kobi Market popularly called Abinkyi Market in Kumasi, Ashanti Region, on Thursday, 25 February 2021, protested against the Kumasi Metropolitan Assembly (KMA) for demolishing and locking up their shops. 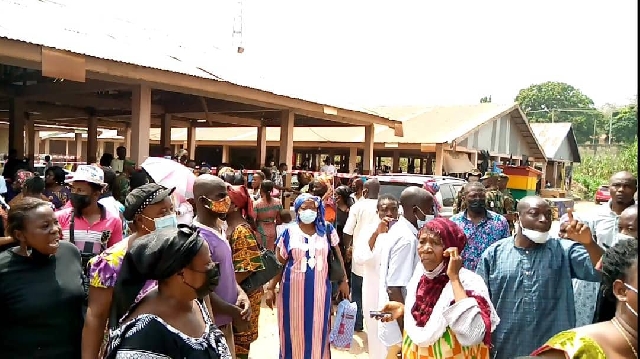 The aggrieved traders say the assembly must restore their shops.

According to them, the Assembly, led by the Kumasi mayor, wants to relocate their shops.

The traders said the assembly did not give them prior notice and only found out about the exercise when they arrived at the market.

A team of soldiers was deployed to the market to calm the aggrieved traders.

The traders have called on the mayor to come to their aid.

Reacting to the incident in an interview with Class91.3FM’s Ashanti regional correspondent Elisha Adarkwah, the mayor, Mr Osei Assibey Antwi, said the affected traders abandoned their shops and left the market.

He said the assembly needed a place to relocate traders at the Kumasi Central market to pave the way for the commencement of the second phase of the Kumasi Kejetia-Central redevelopment project.

The Assembly, he said, therefore, took the action to take over the shops and reallocate them to the Central Market traders.

Meanwhile, second-hand clothing sellers at the Kumasi Central Market, who are to be relocated to the Afia Kobi Market, have indicated that due to the dispute over the shops, they will not relocate to the market.

Vice-Chairman for the Second-hand Clothing Sellers Association, Mr Yaw Adu, noted that they will only move to the market if the KMA resolves the dispute in relation to the shops.