A/R: We'll not relocate, find us another market – Traders 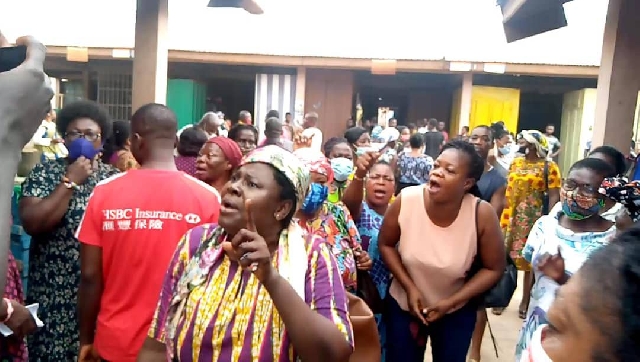 The traders wailing during the protest

Second-hand clothing sellers at the Kumasi Central Market in the Ashanti Region have said they will not relocate to the Abinkyi Market until the Kumasi Metropolitan Assembly (KMA) finds them a suitable place to move their business.

The traders held a protest against the KMA on Thursday, 4 March 2021.

The aggrieved traders, numbering about 5,000, described the spaces demarcated for them as too small to accommodate them.

They also expressed their disappointment with Kumasi mayor Osei Assibey Antwi, who, they asserted, had promised to find them a spacious area.

However, upon arrival at the Abinkyi market, their expectations were not met.

The traders are expected to relocate to enable work to begin on the second phase of the Kumasi Kejetia-Central market.

The traders noted that they would not relocate until an appropriate market is found for them.

They appealed to the Kumasi mayor to rescind his decision to move them to the Abinkyi market and rather find them a more appropriate market that suits their needs.

Speaking to Class91.3FM’s Ashanti regional correspondent, Elisha Adarkwah, some of the traders who were wailing, bemoaned the action of the KMA.

A female trader said: “The NDC would never do this, we voted for the NPP.”

A male trader also stated: “Osei Assibey, after voting for you, this is what we get? NPP is wicked.”

Another female trader said: “We don’t like this place, we can’t sell here, no-one will come to Abinkyi market to buy second-hand clothes, then take us to Kofrom Market instead.”

The Public Relations Officer (PRO) of the traders, Mr Michael Amponsah, called on the KMA to find them a more appropriate market.

Mr Amponsah said: “As for us the leaders, we’re aware that the KMA’s actions are contrary to the agreement we had with them. They’re doing what they like. We discussed the way forward on this. How do you come to the field to change what we discussed, it doesn’t bring peace. We won’t engage them in a banter, all we have to say is that they should find us an appropriate place.”

He also called on the Regional Minister to keep to his promise.

“We are appealing to the leaders, we plead with the Regional Minister, we went to him and he promised to relocate all of us to one place, we plead with him to keep to his promise. They should give us a place that we can all do business, else they’ll destroy our business. The place is too small to accommodate all the second-hand traders,” PRO for the traders said.