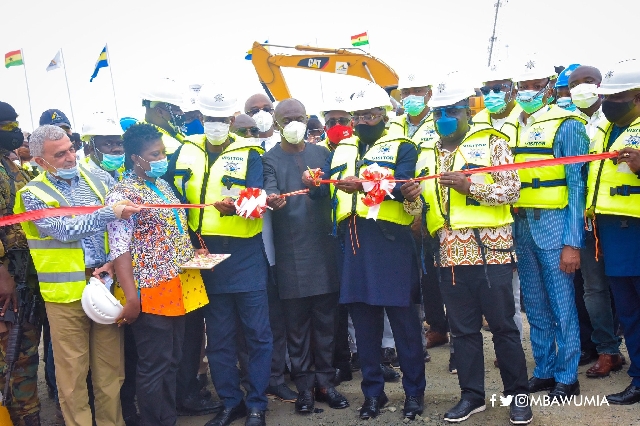 Dr Bawumia cutting the ribbon to open the project

Vice President Dr Mahamudu Bawumia, on Tuesday, 15 September 2020, was in Takoradi, the Western Regional capital, for a day's working visit where he began the day by opening a $56.7m Liquid Bulk Terminal at the Takoradi Port.

According to him, “The efficiency of the new Bulk Liquid Terminal, which has five loading arms for five products, namely: petrol, diesel, LPG, heavy fuel and bitumen, will help BDC companies to avoid delays, which result in high demurrage cost.”

Dr Bawumia further stated that the expansion of facilities at the Takoradi Port underlines the government's commitment to improving maritime transport, “which is significant to the growth of our economy.”

After that, he attended a ceremony to cut the sod for the construction of the first-ever interchange in the Western Region at the PTC Roundabout in Takoradi.

This brings to six, the number of interchanges the government have started in its first term of office.