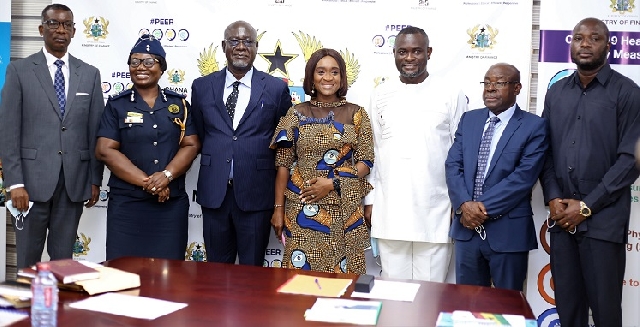 The new FIC Board

The reconstituted board of the Financial Intelligence Centre (FIC) has been charged with the responsibility of ensuring Ghana does not re-appear on the Financial Action Task Force (FATF) grey list.

It would be recalled that Ghana escaped being blacklisted by the FATF after the task force detected some deficiencies in the country’s Anti-Money Laundering (AML) regimes in 2019.

This, Mr Ofori-Atta noted that “by dint of hard work” and support of the Ministry, FIC was able to complete the prescribed action plan, taking the country out of the grey list even ahead of timelines.

Consequent to that, the Finance Minister mentioned that the meeting of the FATF action plan, revived confidence in the economy and Ghana is placed on a high pedestal as far as AML regimes are concerned.

"It is my hope that you will continue to work to sustain the gains made so that we do not go back to where we came from."

The newly reconstituted board is chaired by the immediate past Executive Director of the Economic and Organised Crime Office (EOCO) and former Director-General of the Criminal Investigations Department (CID) of the Ghana Police Service, Commissioner of Police (COP) Mr Frank Adu-Poku (Rtd).

The other members are a former Director of the National Intelligence Bureau (NIB), Mr Kwaku Dua, a Deputy Minister of Finance, Mr John A. Kumah; Director Legal at the Ministry of National Security, Mr Osei Bonsu Dickson, and the Director-General, Intelligence of the Ghana Police Service, Maame Yaa Tiwaa Addo-Danquah.

The rest are the Director and Head of the Financial Stability Department of the Bank of Ghana, Dr Joseph France, and the Chief Executive of Precious Rental Services, Nana Domtie Onwona-Kwakye.

Mr Ofori-Atta said the new AML Act, 2020 (Act 1044), which had come in to address all loopholes in the previous law, would help the board deliver on its mandate.

The Minister assured the board of the government's continued commitment as it takes steps to strengthen AML structures in the country.

He commended the FIC for collaborating with revenue authorities to combat tax evasion and other tax crimes over the years.

COP Adu-Poku assured the government that the board would bring its varied expertise to bear to consolidate the gains made in AML in the country. The Board Chair, therefore, appealed to all the directors to work together as a unit to execute and achieve results for the mandate placed on them.

"We should commit ourselves as a board to help fight and avoid the menace of money laundering which, if not well controlled, will ultimately lead to blacklisting, with its attendant economic, political and social implications for our dear country," the Chairman added.

The FIC was established by Section 4 of the Anti-Money Laundering (AML) Act, 2008 (Act 749) as amended to assist in the identification of proceeds of unlawful activity, assists in the combat of money laundering activities, financing terrorism, financing the proliferation of weapons of mass destruction and any other transnational organised crime.

They also collaborate with revenue authorities to combat tax evasion and other tax crimes.