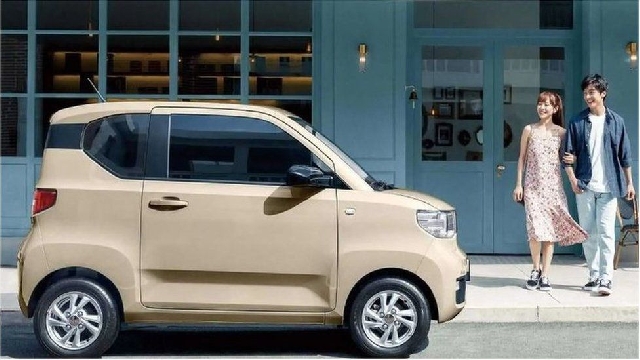 The Hong Guang Mini EV is being built as part of a joint venture with US car giant General Motors (GM).

Last month sales of the budget electric car in China were around double those of Tesla, which was questioned this month over safety issues there.

While the $4,500 Hong Guang Mini is the most popular model, there is an upgraded one with air conditioning for just over $5,000. The cars are being marketed as "the people's commuting tool".

The joint venture partnership, SAIC-GM-Wuling, is known as Wuling locally.

Car experts have said that while it clearly lags well behind Tesla when it comes to its battery, range and performance, its convenience and low price have made it one of China's bestselling "new-energy" vehicles.

Having launched last year, the basic model has a top speed of 100km/h (62mph) and can accommodate four people at a squeeze.

"China's government is serious about pollution reduction and becoming the global lead in adopting and promoting innovation of electric vehicles," Shaun Rein, managing director of the China Market Research Group, told the BBC.

"We remain very bullish on the adoption of budget EVs like the Hong Guang Mini to higher-end ones like NIO and Tesla."

To promote EVs, the Chinese government offers license plates for free and they are guaranteed. In many cities, it can take months, if not years, to get a license plate for a petrol engine through various auction systems.

The Hong Guang Mini EV saw sales of 112,000 for the second half of 2020, ranking second behind Tesla's Model 3 which are made in its Shanghai factory.

Earlier this month five Chinese regulators summoned Tesla over quality and safety issues at its plant. China is Tesla's largest market after the US.

For January, Hong Guang Mini sales outstripped Tesla almost two-to-one. It is now believed to be the second-best-selling electric model worldwide behind the Model 3.

The tiny, all-electric EV sold 25,778 models in China in January according to the China Passenger Car Association (CPCA). This compares to 13,843 for the Tesla Model 3.

But high-end electric vehicles have still been performing well with Tesla more than doubling its sales volume in China last year.

The Hong Guang Mini EV could make an appearance outside China, as Wuling has said it plans to export the EV overseas.

"China has so many makers of small and cheap electric vehicles, however, most of them are low-quality and low-speed products that do not appeal to a wide market, said Sam Fiorani, at Auto Forecast Solutions.

"The Hong Guang Mini is the first time a major company has stepped up with a simple EV that targets buyers looking for a real car."

Reports have linked Wuling to a Latvian automaker who could sell a version of the car in Europe. However, the price is likely to be twice as high due to European environmental requirements.