We're acting in your interest; trust us – Gov't to Ghana Bauxite Co. staff 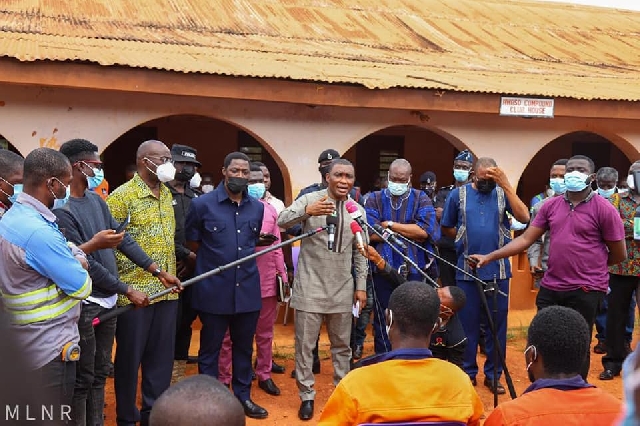 The Deputy Minister of Lands and Natural Resources in charge of Mines, Mr George Mireku Duker, has given workers of the Ghana Bauxite Company the assurance that the government will not make any move that will deprive them of their livelihoods.

According to Mr Duker, the government’s ultimate aim is to protect the livelihoods of the staff, ensure the sustainability of the company and strategically position it as the nation’s foremost bauxite firm.

Addressing the staff after a meeting with the management of the company on Tuesday, 24 August 2021, Mr Duker explained that the immediate step being taken by the government, is geared toward streamlining the activities of the company so that it does not flout the country’s mining laws and also guarantee maximum benefit for the state and the workers.

Mr Duker said the government is bent on finding ways to realise the company’s full potential and make it a viable source of revenue and employment.

“I will ask you to relax because you are the reason why we are here. We are not going to leave you behind”, he assured the workers, adding: “We’ll carry you along for the prospect and future of this company”.

“You may have a heart that will say: ‘I wouldn’t understand what the minister is saying’, but in all sincerity, we are all here for the betterment of this country and that explains our visit this morning”, he said.

“As the supervising ministry, we are working to ensure that we make the settlement, so, please never lose trust and faith or throw your hands in despair. There is a future that is going to see this government move from strength to strength. So, I’m here to assure you of our commitment,” he added.

The Member of Parliament for Tarkwa-Nsuaem noted that the company’s fortunes have dwindled over the years due to inefficient management but the government, through the Ministry of Lands, is prepared to ensure a turnaround.

He urged the workers to have faith in the government and give it their utmost support to help propel the company to higher heights.

“Our history hasn’t been that smooth in terms of profit-making and that has not given the country the dividends it expects.  The future of this company is important. Whatever will be mined today, we will not have it tomorrow. You also know that we mine for a purpose. South Africa is touted to have used mining to develop some of its cities because the owners of those concessions are in the country and whatever they mine are kept in South Africa. In Ghana, we have a different story because most of our big companies are foreign-owned, so, we depend on taxes,” he pointed out.

Mr Duker cautioned that the government will not hesitate to crack the whip on foreign companies found culpable of breaching the country’s laws.

He, however, gave the assurance that mining firms that strictly adhere to the rules will be protected and enjoy the full benefit of their investment.

The Western North Regional Minister, Mr Richard Joojo Obeng, for his part, said the government is concerned with the recent development within the company and is focused on resolving the issues to ensure smooth operations.

The engagement between the minister and the staff and management of the Ghana Bauxite Company follows recent reports of tension within the company over the withdrawal of one of the company’s key investors.

Preceding the meeting with the staff and management was a courtesy call on the paramount chief of Sewhi Anwhiaso, Ogyeahorhuor Kwaku Gyebi II, at his palace.

Mr Duker and his entourage, including the CEO of the Minerals Commission, Mr Martin Ayisi; CEO of GIADEC, Mr Michael Ansah; the Chief Inspector of Mines, Mr Richard Kofi Adjei, and the Technical Director of Mines, Mr Peter Awuah, are on a fact-finding mission to unravel the full state of the company and how the issues crippling it can be resolved.