Lamar Odom gets engaged to Sabrina Parr 3 months after dating 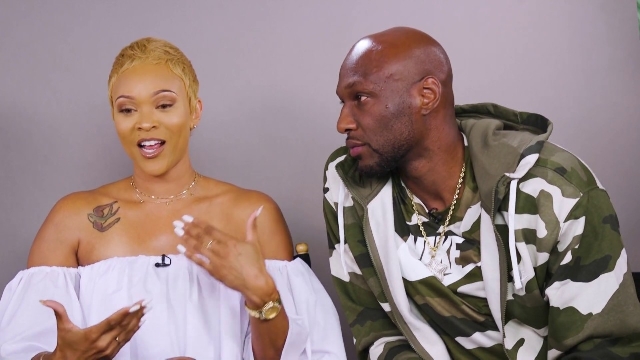 Lamar Odom popped the question to girlfriend Sabrina Parr — and she said yes!

On Monday, Odom, 40, announced their engagement with a sweet Instagram photo of the soon-to-be-married couple posing together inside Prime 112 Restaurant in Miami.

“Introducing my new fiancée!! Soon to be Mrs Parr-Odom,” Odom captioned the post adding, “She the ONE!!!!! @getuptoparr.”

In the shot, Parr, 32, smiled widely as she showed off her massive engagement ring.

The health and life coach also shared the news, posting a slideshow of videos of her new rock.

Introducing my new fiancé!! Soon to be Mrs. Parr-Odom. She the ONE!!!! @getuptoparr

The videos show Parr moving her hand around as her pear cut diamond glistened for the camera.

Odom made his relationship with Parr Instagram official in August, sharing a photo of his lady love sitting in his lap.

“What we have is much more than they can see…” Odom captioned the shot.

That same month, Odom and Parr spoke out about their romance during an interview on Dish Nation.

“When a black woman comes along, ain’t playing,” Hayes joked.

Parr was then asked why she decided to pursue a relationship with Odom, despite his highly publicized past.

“Sometimes pain, I think, attracts women,” Odom initially answered before Parr could. “The pain I’ve been through.”

“That wasn’t my story, I wasn’t attracted to the pain and the drama,” the health and life coach rebuked.

“You have to meet people where they are,” Parr continued. “He was never in a position to be someone’s husband, you know? He was sick, he needed to heal, he needed to grieve. He experienced a lot of losses. And he never had time to go through that.”

Odom was previously married to Khloé Kardashian. The stars tied the knot in 2009 just one month after they met.

They split after four years of marriage due to Odom’s struggles with addiction and infidelity, and their divorce was finalized in 2016.