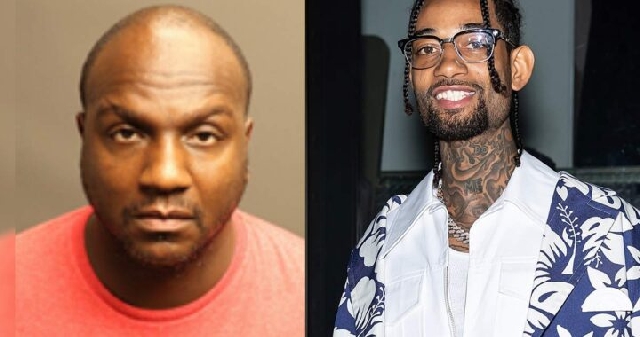 LOS ANGELES -- A man wanted in connection with the killing of rapper PnB Rock was apprehended in Las Vegas on Thursday, as authorities released stunning new details of how the fatal shooting allegedly occurred.

Freddie Lee Trone, 40, was taken into custody by the Las Vegas Criminal Apprehension Team Task Force, the LAPD said in a statement.

The fugitive suspect and his 17-year-old son were also formally charged Thursday in the shooting at a South Los Angeles restaurant.

Court documents allege that Trone's son, considered a minor, is the one who actually pulled the trigger and robbed the rapper inside the Roscoe's Chicken & Waffles on Sept. 12. Freddy Trone allegedly acted as the getaway driver, while his wife stands accused of being an accessory after the fact.

The documents allege that Freddy Trone dropped his son off near the restaurant that day. His son was armed with a handgun and had his face covered with a mask.

The rapper was sitting inside the restaurant with his girlfriend, wearing what authorities described as "jewellery valued at several hundreds of thousands of dollars."

The teen allegedly pointed the gun at the rapper and demanded "Give me all of your jewellery now!"

The documents do not indicate if PnB Rock resisted, but say the teen shot the rapper in the chest while he was sitting at the table and then two more times in the back as he was falling to the ground.

He then allegedly removed jewellery off the rapper's dying body, including necklaces, rings and watches. He also took a watch from his girlfriend. The rapper was later transported to a hospital, where he was pronounced dead.

Freddy Trone then allegedly drove up to the back of the strip mall parking lot and drove his son away, returning home but leaving the car parked a few blocks away.

Trone is expected to be booked in Las Vegas pending extradition to Los Angeles.

He and his 17-year-old son, who was arrested Tuesday in Lawndale, are charged with one count each of murder and conspiracy to commit robbery and two counts each of second-degree robbery involving the Sept. 12 killing of 30-year-old Rakim Allen at Roscoe's Chicken & Waffles at 106 W. Manchester Ave., where he was eating lunch with his girlfriend.

The teen, whose name has not been released because he is a minor, made his initial court appearance Thursday in a Compton juvenile courtroom, prosecutors said. He is due back in court on October 19 for a pretrial hearing.

A third defendant, Shauntel Trone, 38, was set to be arraigned Thursday on one count of being an accessory after the fact. A source told ABC7 that she is the teen suspect's stepmother.