'Stir It Up': Shatta Wale's 'ghost' comment a compliment, the collabo has 'positive' industry implications – Sarkodie 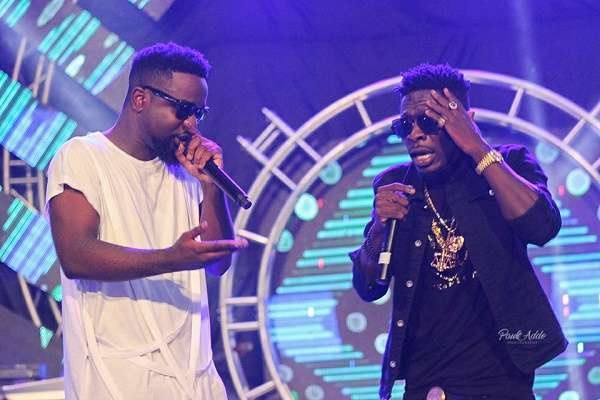 Sarkodie has reacted to Shatta Wale calling his song with the late Bob Marley a collaboration with a ghost.

An App user called Oprah asked if the rapper had heard from his industry fellows and what his response would also be to Shatta Wale calling his latest song a collaboration with a ghost.

"I've not been on my phone that much," he said. "Actually, the whole of today, this is the first time that I'm actually on it [phone] and staying on it. So maybe there's been some reaching out... I haven't checked social media that much to see from everybody else but I think everybody is happy for what has happened unless I am proven wrong."

"I think everybody is happy," he stressed when he was reminded to react to Shatta's comment. "What did he say? I am yet to hear it."

He continued by saying "the blessing" with "having fanbases in the country is, we have the support; Sark Nation keeps me going, my numbers go up because I have a fanbase."

On the other hand, he said: "The curse with having fanbases in the country is," the distraction that comes when they bicker among themselves "when something bigger and huge way more than us [artistes] happens." He argued that these great projects go beyond the primary artiste and have industry and national implications "for everybody who can get something out of this." He added that: "It's a positive thing that has happened."

The two-time BET award-winner had in view his latest music work which is a collaboration with Bob Marley & The Wailers. It is reported Island Records and Marley's family tasked the Ghanaian superstar to put a rap verse on the late Reggae icon's 'Stir It Up' classic. He did and the song was given Hiphop contextualisation by Ghanaian hit record producer MOG Beatz.

On Friday when the song was released, it was met with much glee and criticism.

Reggae/Dancehall artiste Shatta Wale on DJ Reuben's drive time show on Kumasi-based Luv FM said: "Sarkodie has featured Bob Marley, it’s so beautiful, at least we have someone who has featured a ghost. We should praise him.”

"We should praise him," he stressed.