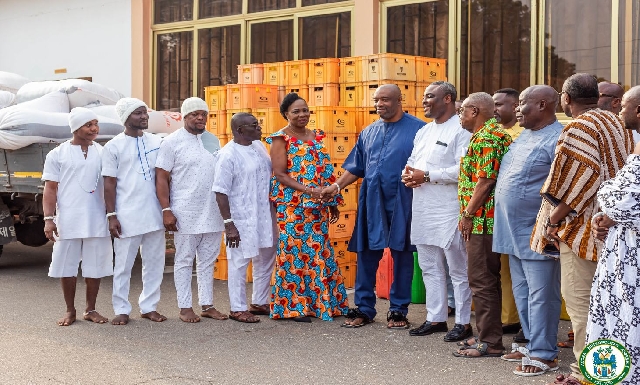 The Accra Metropolitan Assembly (AMA) in collaboration with its sister assemblies has donated food items to the Ga Traditional Council (GTC) ahead of the Homowo festival celebrations.

The items included bags of maize, palm fruits, tubers of yam, drums of palm oil, cartons of assorted drinks, and an undisclosed amount of money.

Speaking to the media at the brief presentation of the items on Wednesday, Chief Executive of the AMA, Hon Elizabeth Kwatsoe Tawiah Sackey who led the delegation said, the donation of the food items to the GTC forms part of measures to support this year's Homowo celebration.

She explained that the items were to aid in the preparation of the traditional food, locally known as "kpokpoi", a meal made with corn and palm oil, prepared to celebrate the festival, hence the donation of the food items.

“I want everyone to understand that the Homowo festival is here and as such, there's the need for the Assemblies to come in and wish the people of the Ga state happy celebrations and by doing so we couldn't afford to come empty-handed, hence the donation of these food items, some assorted drinks and an undisclosed amount of money to help make this year's celebrations a memorable one,” she said.

She also added that security measures were been put in place to ensure a peaceful and successful celebration of the festival come Saturday 13th August 2022.

“As we speak, myself and the Regional Minister have met various security bodies to ensure a peaceful, celebration of the festival," she averred.

The Mayor of Accra also used the medium to call on all and sandy to endeavour to keep their frontages clean as they celebrate the Homowo festival and also admonished residents to desist from any violence before during, and after the celebrations.

“I also want to remind you all to abide by the sanitation Byelaws by keeping your frontages clean,” she said.

Nii Adote Otintor II, Chief of Sempe Traditional Area and Mankralo of the Ga state expressed utmost gratitude to the Mayor and its sister Assemblies for the donation and called on all and sundry to join in the celebrations come Saturday.

“We want to say a big thank you to the Mayor and its sister Assemblies, for having us at heart to ensure a successful festival.

According to history,  a severe famine broke out among the Ga people during their migration to present-day Accra which inspired them to embark on massive food production exercises which eventually yielded them a bumper harvest hence the Homowo festival which also means “hooting at hunger”.