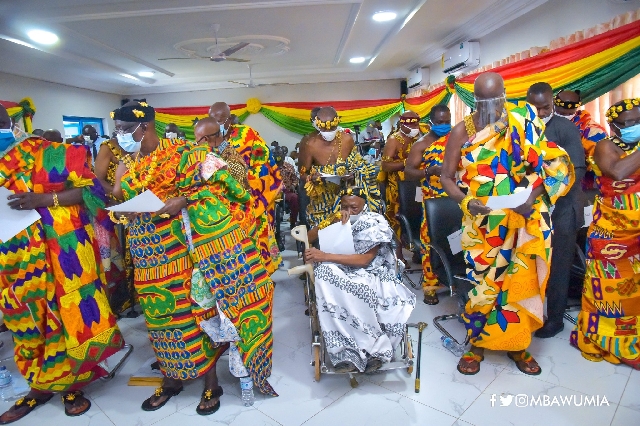 Speaking at both events, Vice President Bawumia said the creation of new regions has changed the administrative boundaries of the country, with the paramount objective to quicken the process of developing every part of the country.

"This change has also affected the structure and management of Chieftaincy institutions, and as a result, we have to form new Regional Houses of Chiefs, particularly in our new Regions," Dr Bawumia said.

The Vice President recalled the historical role the Chieftaincy institution played in the liberation of the country, adding that traditional rulers have continued to play immense roles in the development of the country in contemporary times.

"Chiefs and traditional authority played very significant roles in our liberation efforts. We can recall the contribution of very important Chiefs who stood to protect our land and natural resources, who championed our rights and liberties and were in the forefront in spearheading our social-economic, cultural and political charge."

"Without the active involvement of our chiefs, perhaps the cause of our economic and political roadmap would have taken a different character.  I pay homage to them."

"Like all institutions of state, at different periods of our history, some have wondered whether chieftaincy is still relevant to our development. But just as it has been in the past, Chieftaincy will continue to be an indispensable part of our history and development."

"You will continue to be the upholders of our national values and aspirations as a society. So much so that even when our fellow Ghanaians leave our shores and can be free of the influence of chieftaincy, they create Chiefs and Queen mothers wherever they find themselves."

Dr Bawumia stressed that the Akufo-Addo government recognises the important roles traditional rulers have to play in the governance set up of the country and has thus improved government's support for the Chieftaincy institution since taking office in 2017.

"Government recognises that, in order to ensure the success of the programme of social and economic transformation that was put before the Ghanaian people, we have to do a lot. It is important that we bring the traditional role of our Chiefs into the modern, constitutional set up, under which we govern our country."

"As a start, we made a pledge, in the NPP’s 2016 Manifesto, to increase the monthly allowances paid to Chiefs, and the quarterly budgetary support to the Traditional Councils and Houses of Chiefs. This we have done by a hundred per cent (100%)."

"Government has also assisted the National House of Chiefs with three million, five hundred thousand cedis (GH¢3.5 million) for the completion of its new headquarters office complex in Kumasi."

"Government is also committed to assisting the National House of Chiefs to move speedily on finishing work on the codification of the traditional norms and rules that have guided our communities throughout the ages.

Traditional rulers in the newly created Oti Region expressed gratitude to the government for the realisation of their dreams of having a region, which they said has given them identity.

In Tamale, the President of the Northern Region House of Chief, Ya Na Abdulai II, said the creation of the new region would deepen decentralisation and participatory democracy, which he hoped will ensure equitable distribution of national resources in the new regions.

He highlighted the important role chiefs play in governance, and called on the government to allocate more resources to the various house of chiefs in the country for them to play their traditional roles well.

Similar inauguration ceremonies have been held for the Bono, Bono East and Ahafo Regions.