New Juaben Trad. C'cil to erect statue in honour of Kwaku Boateng I 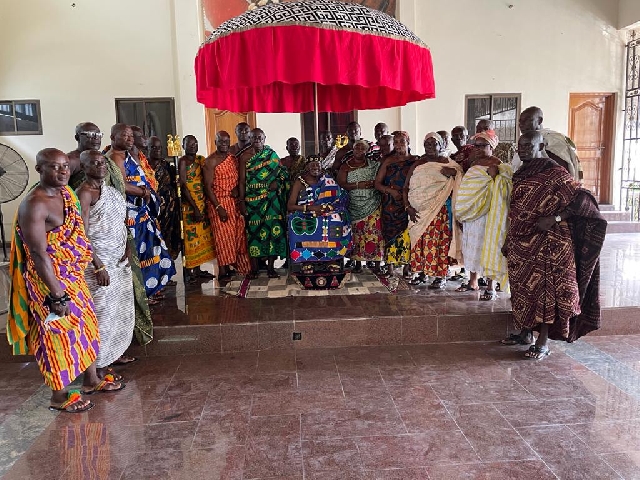 The New Juaben traditional council has resolved to erect a statue at a roundabout opposite the Omanhene's (paramount chief) palace in Koforidua in honour of Daasebre Kwaku Boateng I, one of the paramount chiefs, who ruled from 1913 to 1930.

The honour is in recognition of his immense contribution to the building of the state of New Juaben, particularly, as well as the Yiadom-Hwedie palace in Koforidua, which is now a tourist attraction.

The New Juaben traditional council, in a statement signed and issued on Wednesday, 7 April 2021, said at “its meeting held on Tuesday, 6 April 2021 at Omanhene's palace, Koforidua, resolved to honour Daasebre Kwaku Boateng I, who reigned from 1913 to 1930 by erecting a statue at the roundabout opposite Omanhene's palace in Koforidua".

The traditional council noted that during the reign of Daasebre Kwaku Boateng I, Koforidua became the capital of the then-Eastern Province of Ghana in 1925.

Furthermore, Koforidua also became a major road and junction to the Kumasi-Accra railway line in 1923.

According to the traditional council, the latest resolution to build a statue in honour of Daasebre Kwaku Boateng I, is expected to be a unifying force among all his 42 children including Oheneba Yao Boateng and their siblings.

Recently, the traditional council destroyed a statue of Oheneba Yao Boateng that was erected in the town.

According to the council, the statue was removed because it was erected without the authorisation of Omanhene Daasebre Professor Oti Boateng and the council.

2. Oheneba Yao Boateng, who is not a royal from the Yiadom-Hwedie Royal Stool derives his status as Oheneba from his father, Nana Kwaku Boateng I, who reigned as Omanhene of New Juaben from 1913 to 1930.

3. One would have expected the children of Oheneba Yao Boateng, who erected the statue, to exercise due diligence and circumspection by first considering their grandfather, Nana Kwaku Boateng I, for the honour rather than his son and their father.

5.  On page 5 of the commemorative brochure on the late son of Oheneba Yao Boateng, Nana Yao Boateng Junior, dated 30th January 2021, which coincided with the timing of the erection of the statue is written the following: “Being a royal from both the paternal and maternal sides of the divide, Nana Yao was passionate about his heritage”. This claim to the New Juaben royal lineage is completely false since, in the Akan kinship structure, the son of an Omanhene is not a royal.  Lineage in the Akan kinship system is always traced from the mother side and never from the father side as the children of Oheneba Yao Boateng are purporting to do.

6.  The New Juaben Traditional Council has already earmarked the very spot for erecting the statue of Nana Kwaku Boateng I to commemorate his unique contribution as the Omanhene who built the New Juaben Palace. This decision is non-negotiable and cannot be varied in any way.

7. Oheneba Yao Boateng has not done anything tangible for the New Juaben State to merit the erection of his statue at such a vantage point or anywhere else in the Traditional Area. Besides, it is totally wrong on the part of his children to take such an extremely self-serving and inward-looking decision to honour their father without involving the traditional leadership.

8.  When Oheneba Yao Boateng’s children were summoned to the Traditional Council on 5th February 2021 for questioning on the issue, they apologized to the Council and agreed to remove the offending statue.  The statue has to date not been removed. The children have also on two different occasions, on 5th March and 19th March 2021 respectively, refused to honour specific requests by the Traditional Council to attend its meetings on the issue.

9.  It has now emerged that Oheneba Yao Boateng’s children have produced and widely distributed a video of the offensive statue in the United States of America, United Kingdom and Ghana. The Traditional Council is in possession of a copy of the video which is totally repugnant to the history and sensibilities of the Chiefs and people of New Juaben.

The statement said for the above reasons, the traditional leadership of the New Juaben State, the New Juaben Traditional Council, decided without any equivocation on Friday 19th March 2021, to remove the statue of Oheneba Yao Boateng forthwith.