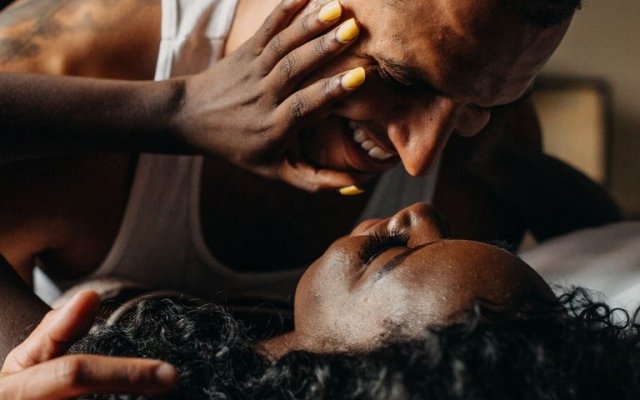 “Do they want to sleep with me, or are they just being friendly?” It’s the age old question that many a man has failed to answer. When wrong, and you pursue a sexual or romantic relationship, you risk losing a close friendship or put yourself in a situation where you can get brutally rejected. (There are few phrases more devastating than: “You know I like you. I just like you as a friend.”)

But if you don’t go for it, and they do in fact want to have sex, you’re missing a golden opportunity. They could have been that incredible lay (or serious partner) you’ve dreamed about since adolescence. So how do you know if the sexual tension you feel is real, or if you simply want it to be real? How do you know if they want to get down, too?

Here are four telltale signs that the sexual tension is mutual.

1. You're both sustaining eye contact.
The eyes are not just a window into a person’s soul, they’re also a direct highway to pound town. “Eye contact provides some of the strongest information during a social interaction,” James Wirth, a social psychologist who studies eye contact, previously told The Scientific American. It’s why your mother always told you to "look him directly in the eyes while shaking his hand."

When there's a strong sexual desire, our eyes can make that abundantly clear. Sustained eye contact, and we’re taking 3 or more seconds, is a huge indicator. This is even more true if you find yourself still making eye contact during a lull in the conversation. If no words are being said, but you’re still intensely gazing at one another, they likely want to rip your clothes off right there.

2. Your conversations feel a little awkward.
Sexual tension is all about, well, tension... and tension can be awkward. While you may want to passionately go at it in one of the handicap stalls, you’re instead standing by the water cooler asking when they plan to finish their TPS reports.

Those reports, clearly, are not what’s really on your mind. It’s undeniably awkward speaking about something banal when your mind is off imagining what the two of you could be doing together. Since it’s distracting, you might not be focusing on whatever it is they’re actually saying, which can cause you to miss a beat in the conversation or ask them to repeat themselves. That leads to a hell of an awkward conversation.

Still, you need to make sure that they, too, are acting awkwardly because they feel the sexual tension—not because they're uncomfortable.

"In the midst of what you think is sexual tension, be sure not to get blinded by your own excitement," Billy Procida, host of The Manwhore Podcast, tells Men's Health. "When there's an awkward pause in the conversation, does she smile while nervously looking away, giggling as she fidgets with her hair? Do his cheeks get red? Or are her eyes trying to locate her phone so she can make a quick escape?"

"You need to ask yourself," Procida makes clear, "are you reading sexual tension in her body language, or are you seeing what your desires want you to see?"

3. You're in close proximity while talking.
There’s actually a large field of research called proxemics, which studies how human space affects communication, social interactions, and the larger population. While it differs by culture and country, in the United States, most people (without sexual tension) stand about 4-12 feet away in what’s called a social distance. Personal distance, which is usually only for friends and family is categorized as 2-4 feet, whereas intimate distance is 0-2 feet. If you find yourself naturally talking to them in the intimate or personal distance space, then yeah, there's probably something going on. I mean, for the love of God, it’s called intimate distance when it's that close, so they likely want to be intimate with you.

4. There's something going on with all that touching.
Sexual tension can be present with or without touching, which can make this a tad bit confusing. The thing is, we often experience sexual tension with someone because we can’t or shouldn’t be with them. This can include a co-worker, boss, a best friend’s ex, teacher, or anyone else where there are valid reasons why it would be deemed inappropriate to have sex. Because of this, you both may want to touch but are keeping your hands to yourself. In these situations a lack of touching doesn’t necessarily indicate a lack of sexual tension, but rather, an extreme form of sexual tension.

On the other hand, if you’re in a situation where it is okay to touch, and you find that they are taking every opportunity that have to touch you—and I mean platonic touching—then there's likely sexual tension.

"He'll put his hands around your back when he's talking, or maybe he guides you through a crowded bar," Rachel Hoffman, LCSW, M.Ed., previously told INSIDER. "If he reaches for your hand... then you can almost guarantee that he's into you."

And if they’re putting their hands on your thigh while you’re sitting down, yes, Jesus Christ, that’s some sexual tension, and you should act on it.

So what should you do if you sense that they, too, are feeling sexual tension?
First and foremost, don’t get too ahead of yourself. There’s likely a reason you haven’t acted on the sexual tension already: they are someone you shouldn’t be boning. But let’s say it’s not an employee or sister-in-law, then what?

"We take a shot," Procida says. "But you want to make sure that taking a shot is consensual and respects the other person. This isn't a movie—it's not cool to 'take a chance' by pushing someone up against the wall, kissing them, and hoping they were down for that."

So why not ask them out on an official date? From there, it’s a lot easier to actually have sex, since your intentions are clearer—less innuendo and more enthusiastic consent. The key to asking—just in case you’re wrong and they totally don’t want to screw—is giving them an easy way to reject you. This can actually make it less uncomfortable for both parties involved.

I typically say, “I’m not sure if I’m reading this right, but do you want to go out on a date?” Then if they say, “Oh, no…” you can be chill, and reply with, “Okay! Yeah, just needed to get that out of my system. Totally misread.” Will it be slightly awkward for the next few days? Yeah, obviously. But if you’re both mature adults, you’ll get over it and move to a place of friendship without sexual tension.