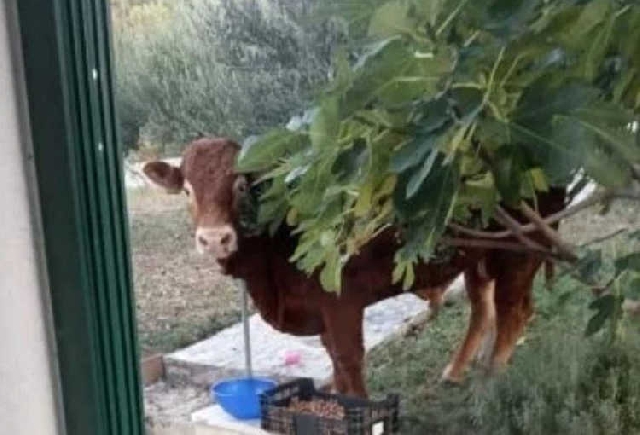 A 650-kilogram bull that managed to escape from a Croatian slaughterhouse last Friday managed to get the attention and support of an entire nation as he continues to elude his owner, police and veterinarians.

The elusive animal, nicknamed Jerry, after the famous mouse in the “Tom&Jerry” cartoon, has been evading his would-be captors and roaming the Croatian coast, outside the town of Split, since last Friday. His owner had sold him to a slaughterhouse, but shortly before being put down, Jerry managed to escape a corral where cattle intended for slaughter were kept and vanish into the nearby woods. Slaughterhouse staff can’t explain exactly how Jerry escaped, but apparently this sort of thing doesn’t happen very often.

After escaping into the woods, Jerry was again spotted by locals on a nearby hill, but he once again managed to escape Skejo and his colleagues thanks to a feline-like jump.

“We wanted to catch him alive but when we approached him he jumped skillfully like a cat on a rock… and disappeared in the bushes,” Skejo told HRT TV.

Jerry has been on the loose ever since, and his owner, police, as well as local hunters and veterinarians,  have been struggling to find him. Some have been searching for him on foot, others in cars, and owner Ivan Bozic even used a drone equipped with a thermal camera, but to no avail.

Ever since news of Jerry’s escape made national news, online support for him has been growing with each passing day. At first it was just comments and hashtags like “Hang in there Jerry!” and “Justice for Jerry” posted on social media, but then Ivan Bozic started getting calls from people wanting to adopt the bull and allow him to live the rest of his days in peace, and now media outlets from all over Europe and even beyond are writing about him.

Jerry’s owner told reporters that the bull earned his freedom and promised to spare him when captured, although it’s not clear whether he plans to keep him on his farm or turn him over to one of the bull’s many fans.

“Since he managed to escape a certain death he will certainly stay alive,” Bozic told local media.

Jerry is only the latest bovine to escape certain death and make news headlines for it. In recent years, we wrote about several such daring animals, like Hermien, a cow that also escaped on the way to a slaughterhouse in the Netherlands, or this Limousine cow that escaped a Polish farm and joined a heard of wild bison. And who could forget this rebel cow that escaped to an uninhabited island? I guess cows have their heroes too.