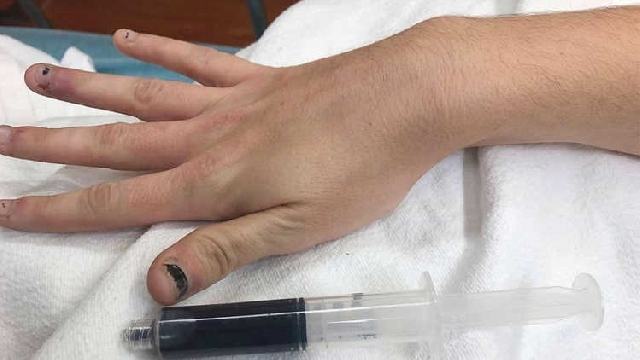 The unnamed woman reportedly walked into a Rhode Island emergency room complaining of general weakness and fatigue, shortness of breath and a symptom that made even seasoned medical staff do a double take – she was visibly turning blue. Doctors described the patient as “cyanotic,” the clinical term for blue and grey discolouration of the skin, which was attributed to the use of benzocaine, an active ingredient in over-the-counter toothache and cold sore medication.

“She reported having used large amounts of topical benzocaine the night before for a toothache,” Drs. Otis Warren and Benjamin Blackwood, who co-authored the case study recently published in the New England Journal of Medicine, wrote.

Dr. Warren told CNN that he was able to correctly diagnose the woman, because he had been lucky enough to see another cyanotic patient a long time ago, during his residency. The case stuck with him, and when he saw the “blue” woman, he knew exactly what to ask for. The benzocaine she had used the night before had triggered a rare reaction which caused a condition called “methemoglobinemia”.

“Methemoglobinemia can occur after exposure to a number of medications, including topical anaesthetic agents such as benzocaine, through metabolic pathways that appear to vary from person to person, which may account for the unpredictability of this complication,” the case study authors wrote.

Basically, the benzocaine prevented the oxygen-rich blood from releasing the oxygen to the tissue, which in turn caused it to acquire a dark blue color. Interestingly, the only cure was also blue. According to Dr. Warren, Methylene Blue returns a missing electron to the hemoglobin molecule that restores oxygen levels and helps release oxygen back into tissue. The patient was given two doses of methylene blue and monitored over night. Her blood returned to normal and she was discharged with a dental referral.

“It’s one of those rare cases that we’re taught about, you study for, you take tests on, but you rarely ever see,” Dr. Otis Warren said.