Man’s long-term coughing caused by leeches in his throat 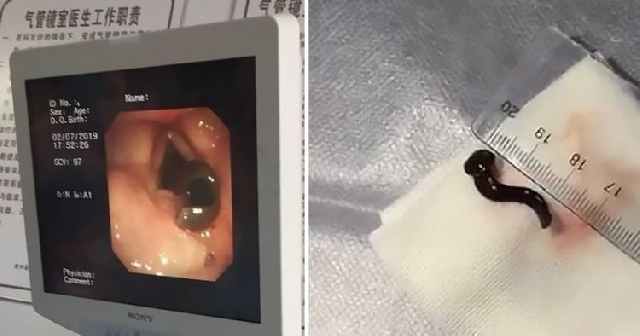 The bronchoscopy revealed two leeches, one located about three centimetres below his glottis

Doctors at a hospital in south-eastern China’s Fujian Province recently reported the unusual case of a man whose non-stop coughing had apparently been caused by a leech attached to his throat.

Last Friday, the unnamed man arrived at the Wuping County Hospital in the city of Longyan complaining of non-stop coughing over the past two months. He had become increasingly worried about his condition after coughing up phlegm and blood, so he finally decided to seek medical attention. Doctors at the hospital’s respiratory department initially recommended a CT scan, but when that didn’t reveal anything, they decided to try a more invasive procedure called “bronchoscopy”, which allowed them to inspect the patient’s air passages with a small camera. That’s how they found a leech living in his throat.

The bronchoscopy revealed two leeches, one located about three centimetres below his glottis (the part of the larynx where the vocal chords are), and another in his right nostril. Obviously the patient had no idea how the leeches had found their way into his body, but doctors believe that he must have accidentally swallowed them while drinking water from mountain streams.

“When he drank the water, it was likely that they were very small and undetectable by the naked eye. In the past month or two, the leeches have sucked the patient’s blood and grown,” Dr Rao Guanyong, director of the hospital’s respiratory department, told Pear Video.

Doctors administered local anaesthetics to the patient before using tweezers to remove the live leeches. Everything went smoothly and the patient is now recovering. The video, which went viral in China, shows the two leeches wriggling around in a plastic jar.