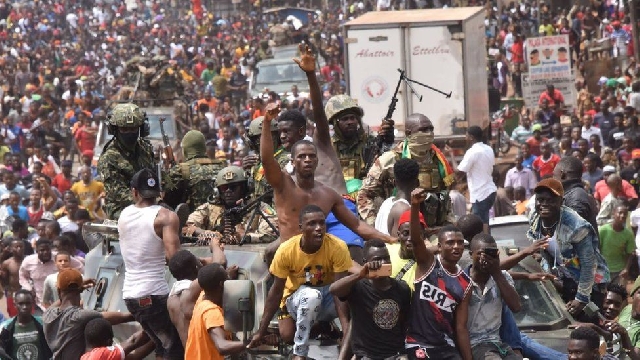 Following military takeovers in five different African countries in the past year, some have suggested that democracy may not be the best form of government on the continent. But here, Leonard Mbulle-Nziege and Nic Cheeseman argue that - despite these set-backs - democracy is the way forward for Africa.

Africa has been hit by a spate of coups that threaten to take it back to the 1980s and the era of military rule. Burkina Faso, Chad, Guinea, Sudan and Mali have all seen the government overthrown and replaced with a military junta.

The situation could have been even more alarming, because failed coup attempts have been reported in the Central African Republic and, just days ago, Guinea-Bissau.

With every country that gets added to this list, the voices claiming that democracy isn't working - and can't work - in Africa grow louder. After all, the overthrow of civilian presidents was followed by street celebrations in some countries as citizens cheered the downfall of elected leaders.

But while it is tempting to interpret the spate of coups as evidence that democracy in Africa is dying, that would be a mistake. Even in the countries in which a coup has taken place, a majority of citizens want to live in a democracy and reject authoritarian rule.

What is more, despite growing frustration with the way that multiparty politics is performing, on average democracies generate higher economic growth and do a better job of providing public services, according to a study at the US's Cornell University.

By contrast, military regimes have a long history of abusing human rights while presiding over economic stagnation.

Put another way, Africa can and does reap a democratic dividend - the problem comes when supposedly democratic leaders start to use undemocratic strategies to keep themselves in power against the wishes of their people.

This is a critical point. In countries like Guinea and Mali, leaders did not lose popularity because they established genuine democracies that failed because this system of government is somehow incompatible with African realities. Instead, presidents atrophied support because they undermined their own democratic credentials in a context of rising instability and - in the case of Burkina Faso and Mali - jihadist insurgencies.

This becomes clear if we go beyond the headlines to ask why some of the recent coups have been publicly celebrated.

In Guinea, former President Alpha Condé controversially modified the constitution in 2020 to allow him to run for a third term in office. This was an unpopular strategy, particularly because neither the constitutional referendum nor the general election that he subsequently won were free and fair.

Mr Condé had also become increasingly authoritarian in the months leading up to the coup, jailing and exacting violence against his political opponents and anti-government activists.

Similarly, former Malian President Ibrahim Boubacar Keïta was accused of rigging the 2020 legislative elections. In addition to concerns over growing corruption and rising insecurity, this undermined his personal legitimacy.

In both countries, civilian leaders lost popularity in part because they departed from democracy, not simply because citizens lost faith with it.

Indeed, it is telling that while many people supported the coups that removed Mr Condé and Mr Keïta, the most recent surveys conducted by Afrobarometer found that 76% of Guineans and 70% of Malians reject military rule.

That the same surveys also find that support for democracy stands at 77% in Guinea, 70% in Burkina Faso and 62% in Mali - further evidence that citizens backed military intervention in the hope that it would pave the way for a more effective form of civilian government, not because they aspire to live under authoritarian rule.

Tellingly, where coups have been seen to usurp processes of democratization, they have been deeply unpopular.

In Sudan, for example, thousands of people took to the streets to protest against a military power grab in 2021 that undermined the supposed transition of power into civilian hands following the removal of long-time leader Omal al-Bashir in 2019. Despite the fact that hundreds of people have been injured and at least 79 killed, the Sudanese people continue to demand their democratic rights.

One reason that democracy may remain the favoured political system for so many African societies - even in countries where it has yet to be realised - is the poor performance of authoritarian governments.

Rwanda is often cited as an example of what a "strong man" can do in the African context - delivering economic growth while reducing corruption.

Yet Rwanda is the exception rather than the rule. In general, the lack of accountability that occurs under dictators and military juntas leads to greater corruption and less effective economic policy.

As a result, on average African democracies achieve higher levels of economic growth while doing a better job of providing public services. They are also less likely to experience damaging conflicts and to commit widespread human rights abuses.

The poor performance of authoritarian forms of government on African soil, and the universal desire to have a say in decisions that affect our own lives, helps to explain why support for democracy remains high.

In turn, this is one reason that military juntas typically justify their actions by claiming that they were intended to reinstitute the rule of law and save democracy from itself.

Another reason is of course the need to try and avoid international condemnation and sanctions by pledging a return to multiparty elections and democratic governance. Yet by invoking democracy to legitimate military takeover, coup plotters create a rod for their own backs.

In many cases, though not all, new military leaders end up delaying the return to civilian rule. In some cases, this is because they enjoy the personal benefits of being in power and don't want to give them up. In others, it is because they have political projects they wish to complete that take longer than expected.

Yet having promised to pave the way for more stable and inclusive government, this inevitably disappoints pro-democratic citizens to the point where the coup leaders themselves face the risk of being overthrown.

Military takeovers are unlikely to provide an effective way out of this dangerous spiral, because every coup weakens democratic institutions and reasserts the power of the gun at the expense of the power of the ballot box.

Finding a way out of instability and insecurity will therefore require building stronger democratic institutions that can withstand manipulation by political leaders, not authoritarian ones that exclude citizens and run counter to their aspirations.