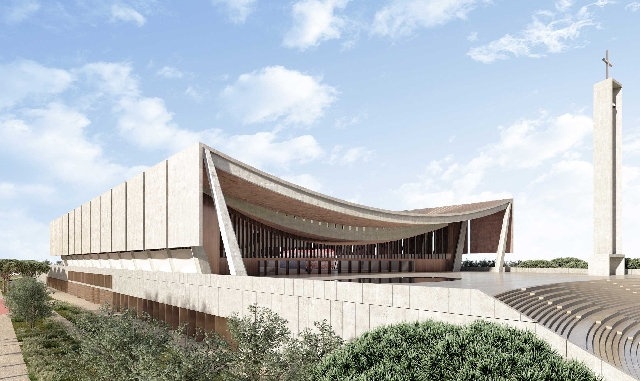 Mr Okudzeto Ablakwa has raised some questions about the decision of Akufo-Addo's government to support the construction of the National Cathedral with the seed money of GHS25 million.

He has accused Akufo-Addo's government of lacking priority and that it was needless for Akufo-Addo's government to donate such an amount of money toward the construction of the National Cathedral while there is non-payment of NABCO trainees, school feeding caterers, service personnel as if Mr Okudzeto Ablakwa genuinely love and care for NABCo trainees and school feeding caterers more than NPP government which started such initiatives.

Mr Okudzeto claims that there was no parliamentary approval for the GHS25 million earmarked for the National Cathedral as seed money by Akufo-Addo's government.

For the avoidance of doubt, the Finance Minister, Mr Ken Ofori-Atta indicated to Parliament in the budget that funds will be released by the government towards the construction of the National Cathedral and it was subsequently approved by the August House.

I would like to ask Mr Okudzeto Ablakwa the following questions:

1. Was there a Parliamentary approval before the payment of 51.2 million to Mr Alfred Woyome for no work done under the NDC government?

2. Was there transparency and sincerity when the NDC government freely gave taxpayers' money of GHS51.2 million to Woyome under the pretence of judgment debts?

3.  Which budget contains the allocation of GHS51.2 million to Woyome?

4. When did Parliament approve the said GHS51.2 million allocation for Woyome?

5. How much taxpayer funds were released to the payments of additional judgment debts apart from Woyome's GHS51.2 million under the ‘create, loot, and share’ scheme of the NDC government?

6. How much in total was the taxpayer contributed to the NDC's create, loot, and share judgment debts payments?

7. Why was the NDC government not complying with the Procurement laws when STX Korea Deal, Saglemi Housing Project, SADA, GYEDA, and Isofoton were executed?

8. Why was there no Parliamentary approval for the international companies such as Isofoton, Waterville Holdings, etc.

When NDC Government contract is Article 181(5) of the 1992 Constitution demands?

9. Was Woyome's GHS51.2 million more prioritised than the allowances for teachers and nursing trainees under the NDC government?

10. Were GYEDA, SADA, and Isofoton more prioritised than solving "Dumsor" which was killing businesses and collapsing manufacturing industries under the NDC government?

11. Was the National Mosque more prioritised than the Christians National Cathedral under the NDC government?

During the 2008 general elections, the NDC indicated to Ghanaians that they would convert the Jubilee House being built by President Kufuor into a poultry farm should they come to power in 2009 and that, the project was not a priority at the time considering the economic predicament and Kufuor's government inability to meet its numerous obligations to the suffering citizenry.

When NDC came into power in 2009, did they convert the Jubilee House to a poultry farm?

They rather shamelessly occupied the Jubilee House and even renamed the edifice the Flagstaff House.